PUTRAJAYA (THE STAR/ASIA NEWS NETWORK) - Former prime minister Najib Razak has dispelled rumours concerning his degree from the University of Nottingham in the United Kingdom.

Najib was asked about his academic qualifications just after he left the Court of Appeal here on Monday (Feb 11).

"Of course, my degree is legitimate," he said with a shrug.

Najib appeared before the Court of Appeal to seek a stay on his SRC International trial, which was supposed to commence on Tuesday (Feb 12).

The Court of Appeal granted the stay.

Mr Chong told Najib to publish the transcripts of his examinations and a copy of his degree to refute the allegation. 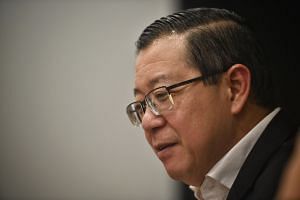 Najib had, on his Facebook post, called upon Communications and Multimedia Minister Gobind Singh Deo to investigate the source of purportedly inaccurate information about the academic credentials of several ministers.

Najib said it was "weird" that the "fake news" that these ministers were graduates was obtained from biodatas issued by the government's official news channel, Bernama.

The profiles were disseminated when the personalities mentioned were appointed ministers about nine months ago.