However, Mr Marzuki's comrades at Parti Pribumi Bersatu Malaysia (Bersatu) have come to his defence.

Umno deputy president Datuk Seri Mohamad Hassan said the deputy minister should resign "if he has any dignity" while the opposition Malay party youth chief Datuk Dr Asyraf Wajdi Dusuki said the issue is about integrity.

“It is not about whether a degree is required to be a politician but it is about integrity. How do you (Marzuki) deceive the people with a fake degree and then claim you are fighting against corruption and propagating good governance and ethics?” said Mr Asyraf.

The two leaders were commenting on reports that Mr Marzuki had obtained his degree from the dubious US-based Cambridge International University.

Mr Marzuki, who previously said he had a degree from the University of Cambridge in the United Kingdom via a distance learning programme, admitted on Wednesday (Feb 6) that his degree was actually from Cambridge International University.

Cambridge International University is not affiliated with University of Cambridge.

Since that admission, the institution has come under intense scrutiny and increasing suspicion that it is a “diploma mill” that awards degrees with little or no study.

"I think they (my critics) misunderstood (my credentials). I (studied) at the Cambridge International University in the United States," he was reported as saying by Malaysiakini.

Cambridge International University admits on its website that it is not accredited.

Amid the furore, Mr Marzuki's comrades have come to his defence.

Bersatu supreme council member Tariq Ismail said the Deputy Foreign Minister should not be judged solely on his allegedly fake degree, and while this was a stigma, at least he did not rape or steal. 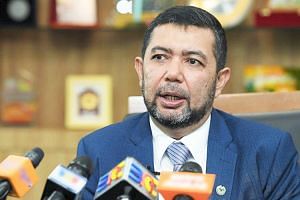 “From his humility and hard work, I’d hire the one from fake Cambridge. The real Cambridge, I'd throw them in the river because they think they own the world and the world has to continuously chase them.

“People should look for dedication and teamwork. He’s not going to be CEO of Goldman Sachs, BP or Felda, or resuscitate Enron. All those people who headed those companies had degrees but were crooks who stole.

“A degree is just a piece of paper that gets you into the workplace. The rest is up to you. Having a dubious degree or not having graduated can be a stigma, but as long as people don’t rape or steal, it is fine,” said Mr Tariq.

He added that he had to opt out of his degree course in London South Bank University due to the Asian financial crisis in the 1990s.

“So, I know the stigma,” added Mr Tariq.

Bersatu deputy president Datuk Seri Mukhriz Mahathir said Mr Marzuki was not appointed to his deputy minister post because of his paper qualification.

“As far as I know, he never declared that he was supposedly a Cambridge University graduate. That only came out in Wikipedia. For his own knowledge, he attended a course by an American online institution which unfortunately had a similar name.

“I’m sure he was not picked to be a deputy minister on the supposed merit of his brandishing a Cambridge University degree,” Mr Mukhriz told The Star.