KUALA LUMPUR (THE STAR/ASIA NEWS NETWORK) - The former director-general of the Malaysian External Intelligence Organisation Hasanah Abdul Hamid has lodged a police report over a letter she sent to the United States' Central Intelligence Agency.

Speaking to reporters after lodging the report in Kuala Lumpur on Tuesday (July 31), Datuk Hasanah said that the letter, written just before the May 9 general election, had nothing to do with former prime minister Najib Razak.

The letter to CIA director Gina Haspel had pitched Najib as a US ally and asked for US support for the Najib administration even if it wins the election "by a simple majority or just one seat."

Najib has said he was unaware of the letter and did not instruct Ms Hasanah to write it.

According to Ms Hasanah's lawyer Shaharudin Ali, the confidential letter of May 4 was genuine but it was just a routine "operational level" matter between the two intelligence agencies.

He also said that the move did not need to be referred to the prime minister.

"The MEIO has established networks with the CIA and other intelligence agencies around the world and such exchange is natural to foster friendship... definitely not with the intention to commit treason," he told reporters, according to the Malay Mail. 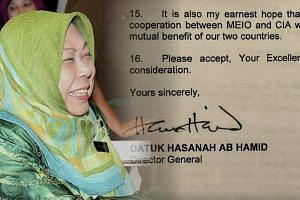 The existence of the letter was first reported by news site Malaysiakini, with officials from the new Pakatan Harapan government saying they wanted investigations into the missive.

In the letter, Prime Minister Mahathir Mohamad, who ousted Najib in the May election, was described as "anti-West and anti-Semite".

There have also been calls by those outside government to probe the veracity of the letter, with claims that asking a foreign government to intervene in Malaysia's political affairs is tantamount to treason.

Ms Hasanah lodged the police report because the letter was an official secret, said her lawyer.

"... what my client wants is for the police to investigate the matter and find who authorised the leakage of official government documents protected under the Official Secrets Act," said Datuk Shaharudin, as quoted by the Malay Mail.