The minister would not say when exactly the 52-year-old will be released, only that it will take place "during working hours".

Basuki will then need to settle administrative matters at Cipinang prison in East Jakarta, where he was held before being transferred to Depok for security reasons.

The Christian-Chinese politician, who was sentenced to two years' jail for blasphemy against Islam, is getting an early release due to remission of sentence because of national holidays, including Independence Day and Christmas.

He also received remission of 3½ months for good behaviour, according to officials.

The former governor is widely referred to as Ahok, the Hakka Chinese name his father gave him.

However, he recently asked his supporters to stop calling him Ahok and to instead refer to him as BTP, the initials of his name.

In May 2017, a Jakarta court sentenced him to two years' jail after finding him guilty of insulting Islam.

It was another blow as he had lost the Jakarta gubernatorial election to former culture and education minister Anies Baswedan a few weeks earlier.

However, Basuki, known for his tough-speaking style and support for pluralism, continues to enjoy much public support. Many supporters visited him in prison.

In April last year, he formally divorced his wife of more than 20 years, Madam Veronica Tan, after a court found sufficient evidence of her infidelity.

Ahead of his release, there have already been media reports and a lot of chatter online about him hosting a talk show and being invited to speak in several countries.

There is also talk that he will marry a police officer next month. 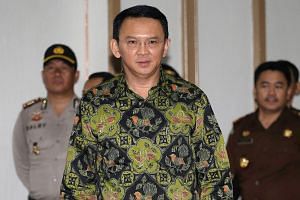 A big Basuki supporter, Ms Tjuk Sudiarti, is very happy about his release and said she will watch that moment on television.

"I burst into tears when watching him on TV this morning. I am so touched that he will finally be freed," she told The Straits Times.

"Hopefully, he will have a happier life out there," she added.

Last year, the 78-year old, together with her daughter and friends, visited Basuki in the Depok Centre, where he joked about becoming a stand-up comedian and spoke about travelling overseas.

"I hope he returns to work as a government official, but I know many people might not like him. So whatever he will do, it's fine as long as that's good," said the mother of three, who admires Basuki for his "discipline, honesty and firmness" which brought breakthroughs, such as bureaucratic reforms, during his tenure as Jakarta governor.

Another admirer, Ms Shintya Kurniawan, 34, who follows his activities on Instagram, professes to be curious about his decision to have people refer to him as BTP.

"I know it's clearly for re-branding, so I am keen to know why he's doing so," said Ms Shintya, who works in a humanitarian organisation.

"His name, Ahok, has an ethnic association. Is his request to people to call him BTP because he wants to appear more Indonesian?" she wondered.

While Ms Shintya, like Ms Sudiarti, would like Basuki to continue working in government, she is aware that he will likely join the private sector.

"I think with all his experience, skills and power, he will make a greater contribution by working in the public sector," she said, suggesting options such as government adviser or chief graft-buster.

Basuki's lawyer Teguh Samudera said on Tuesday that Basuki has plans to get into the oil business in addition to hosting a TV show, Antara reported.