JAKARTA (THE JAKARTA POST/ASIA NEWS NETWORK) - Former Jakarta governor Basuki "BTP" Tjahaja Purnama, also known as Ahok, has officially joined the Indonesian Democratic Party of Struggle (PDI-P), ending speculation on whether the Chinese-Indonesian politician would ever return to politics after being convicted of blasphemy nearly two years ago.

Basuki announced his decision in Bali on Friday (Feb 8) following a meeting with leaders of the party's chapter on the resort island, tribunnews.com reported.

Wearing a red jacket, the PDI-P's signature colour, Basuki told reporters: "I have (thought about this). I have always been a sympathiser."

The PDI-P is the party of Basuki's former partners at the Jakarta administration, President Joko Widodo and Djarot Saeful Hidayat. Basuki was Joko's deputy governor when the latter served as Jakarta governor. Djarot took Basuki's job when Joko was elected president and left his position to Basuki.

The former governor said that he had chosen the PDI-P because the party "fits my ideology".

PDI-P Bali executive I Nyoman Adi Wiryatama said Basuki had officially been a PDI-P member since Jan 26, only two days after he was released from jail.

"As a PDI-P member, he paid a friendly visit to us while touring (the island)," Nyoman said, explaining Basuki's purpose in Bali. 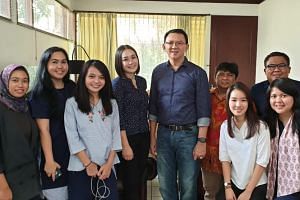 Political comeback for Ahok? Not so soon

Hendrawan Supratikno, PDI-P executive, said Basuki had long been considered a PDI-P member as he was someone who understood and accepted the party's ideology.

"I heard that he already has a party membership card, so there are no administrative issues anymore," he said.

Joko's political rivals have repeatedly attacked the President's alliance with Basuki. The latest anti-Ahok rally in Jakarta saw a call made by an Islamist leader who told Muslims to shun parties that backed "the blasphemer".

Basuki was sentenced to two years in prison for blasphemy following a speech he made in Thousand Islands regency in September 2016 that referred to AlMaidah verse 51 in the Quran.

Basuki said that the verse - believed to ban Muslims from choosing a non-Muslim leader - had been used to deceive people into voting against him. The case played a major role in Basuki's defeat in the 2017 Jakarta gubernatorial election.