LANGKAWI (THE STAR/ASIA NEWS NETWORK) - Figuratively speaking, it was a landing that seemed more massive than the famous eagle perched on the island.

Malaysians set social media alight when word got around that Datuk Seri Najib Tun Razak and his wife Datin Seri Rosmah Mansor had arrived in Langkawi with 30 pieces of luggage.

Apparently, the former prime minister, his wife and their children had checked into a hotel.

"I saw Nawawi, the ex-Barisan Nasional MP. He confirmed that Najib and family just arrived with 30 pieces of  luggage," claimed one netizen.

One senior hotel manager, who declined to be named, confirmed that the couple and their children had checked into the hotel.

It is believed that Najib will be in Langkawi until June 20 and that he will indulge in golf.

On May 12, three days after the general election, a big crowd gathered at the Subang Sultan Abdul Aziz Shah Airport in Selangor after their alleged flight itinerary to Indonesia was leaked out. 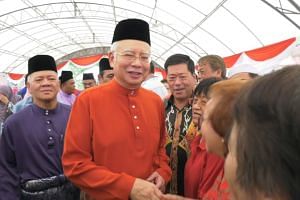 Those who went to the airport wanted to "prevent" Najib from leaving the country.

However, there was no sign of Najib and his wife there. Malaysia's Immigration Department subsequently said that Najib and his family had been barred from leaving the country.

There was further drama when a white multi-purpose vehicle with tinted windows arrived at the airport.

As it turned out, the person inside the car was former minister Datuk Seri Shahidan Kassim.