KUALA LUMPUR (BERNAMA) - Demonstrations can never topple a democratically elected government, Prime Minister Mahathir Mohamad has said in the aftermath of a massive racial rally organised by the opposition in the capital.

He said that although his Pakatan Harapan government allowed street demonstrations, it was only through elections that the government could be changed.

"If elections are set aside, instead we follow what the demonstrators want, democracy will not surface. While we allow demonstrations, small or big, demonstrations by themselves cannot  bring down the government," Tun Mahathir said during an interview on Monday (Dec 10) night on TV talk show Bicara Khas Bersama Perdana Menteri.

What can bring down the government is elections, he said, which could be held earlier to gauge the people's support if it was clear the existing government had failed.

More than 50,000 Malay-Muslims gathered at Kuala Lumpur's Dataran Merdeka (Independence Square) last Saturday afternoon in a celebratory gathering-turned-political rally after the government bowed to their demands not to ratify a United Nations anti-racial discrimination pact.

Although organised by Malay-Muslim civil society groups, the rally was spearheaded by the two largest Malay opposition parties, Umno and Parti Islam SeMalaysia (PAS), whose top leaders were the main speakers on a mobile stage set up in front of the historic square.

In the interview on Tuesday, Dr Mahathir said the Pakatan Harapan government would not deny freedom of speech and that the people were free to criticise the new government. 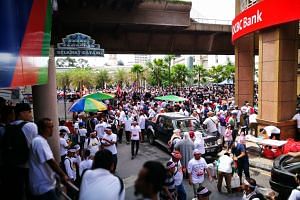 "We need a strong government, but not to a point where such criticisms are ignored, for example, to deny the role of ministers whereby they must agree to whatever is instructed by the leadership," he said.

He said government's strengths were important and necessary, especially when dealing with problems that crop up in society.

He noted that if a government was not strong, it would not be possible to address the problems and conflicts that come up within society, as some would not respect a weak government.

"There may be no respect given to the government. That's why we need a strong government, but not to a point of dismissing criticisms made by any party," he said.

In addition, Dr Mahathir said the experience of a leader was important in the way he managed a problem that arose in his country.

"He should know the type of action he needs to take under the circumstances. In a particular situation, what (action) cannot be taken because if  the approach is not wise , there is a great likelihood that the government will fail," he said.

Dr Mahathir said Pakatan Harapan needed more time to show the results of the changes being implemented, as the government now had to repair the damage done by the previous government.

In terms of performance, out of five stars, he placed his Cabinet ministers at between three and four stars so far, as many of them did not have any previous experience as ministers.

"(After) 60 years being in the opposition, to convert from opposition to government is not a simple matter. I... must be tolerant, and trying to correct mistakes when they happen," he said.

On international relations, Dr Mahathir said that Malaysia would continue to stick to the principle of consultations in resolving international misunderstandings and conflicts.

He asserted that war was not the route to a solution.

"In our relationship with others, there may be certain conflicts. For a dispute between us and them, it must be dealt with. Not by war. We reject war. We prefer to negotiate, go to arbitration or go to court for a decision," he said, adding that when a case was brought to court, the parties should also be prepared to accept the findings made by the court.

In this regard, he hoped that Malaysia and Singapore would be able to resolve the latest conflict on the issue of their territorial waters.

"There is an overlap between the neighbours. For us not to fight, we have to admit there is a problem between us. The problem needs to be resolved, that's our way.

"So we hope to uphold the truth, the rule of law. So if we hold on to the truth, we believe we will win, he said.