JAKARTA - Covid-19 infections have continued to soar in Indonesia with the country on Monday (June 21) reporting the highest daily increase in cases since the beginning of the pandemic, prompting the government to announce a tightening of restrictions but in only the badly affected areas for two weeks.

It ignored pleas by doctors and regional leaders for a large-scale lockdown to deal with the more contagious Delta variant of the coronavirus.

Official figures showed the country recorded 14,536 new infections on Monday, taking the number of overall cases past the two million mark, with nearly 55,000 deaths among a population of nearly 270 million.

The surge in cases has also been blamed on people ignoring a government ban on travel across the sprawling archipelago during the recent Ramadan holidays.

"It's starting to bubble up to the surface, like a time bomb," Mr Windhu Purnomo, an epidemiologist at Indonesia's Airlangga University, was quoted as saying in the French AFP news agency.

"This is just the beginning. Depending on how things are handled, we could end up with a major explosion like in India," he added.

Healthcare facilities are already being stretched to the limit, particularly in the most populous regions such as Jakarta, the capital, and the province of West Java which has reported 90 per cent hospital bed occupancy ratio (BOR). Many other regencies and cities have reported a BOR of 70 per cent.

Indonesia has thus far adopted a colour-coded lockdown regime with regions affected by more infections being labelled red zones and subject to tougher restrictions. Those with fewer Covid-19 cases are labelled orange and yellow.

Refraining from taking any drastic step, the Joko Widodo administration on Monday announced new restrictions in the red zones from Tuesday.

These require restaurants, cafes, shopping malls in the regions with higher infection rates to close earlier, by 8pm. Patrons will also be limited to 25 per cent of the capacity of establishments.

Three-quarters of those working in the non-essential sector must work from home and the rest going into office will have to do so in a staggered manner.

Religious activities at all houses of worship in red zones will also be suspended, and tourist attractions closed.

Many believe the current colour-coded system - widely described throughout the country as "micro lockdowns" - is not working well.

The governor of Yogyakarta province, Sultan Hamengkubuwono X, said last Friday that such localised lockdowns had proved to be unsatisfactory, stressing that a large-scale lockdown was necessary to deal with the situation.

The Jakarta-based health think-tank, Centre for Indonesia's Strategic Development Initiatives, and a volunteer group, LaporCovid-19, have filed an open letter to President Widodo to apply a large-scale lockdown and tougher enforcement of health protocols.

The open letter, which has been supported by noted epidemiologists including Dr Dicky Budiman from Griffith University and various civil society groups, urged Mr Widodo to put aside concerns about the economy, investments and infrastructure projects for the next three months.

"In the past days, we have witnessed a public health crisis with a greater magnitude than what we experienced several months ago. The situation we are facing now is going to get worse in the coming days," the letter says.

The letter said the government had been relatively slow in anticipating the increasing spread of the new variants from other countries, adding that its efforts at managing have been sporadic and not optimal.

Like other developing countries battered by the pandemic, state finances in Indonesia have been constrained by declining tax revenue as businesses reel from weakening consumer demand.

Drastic measures such as a large-scale lockdown will have to be accompanied by costly social assistance and food distribution for the poor to maintain social stability.

Responding to a media query on the health-comes-first-economy-second suggestion, Health Minister Budi Sadikin told a press briefing on Monday that the president has all along emphasised both.

Quoting the president, he said: "The two are intertwined. We have to get the health issue over with before we focus on the economy.

"The President's directive was to focus not only on the downstream - treating the infected - but also on the upstream - making sure the healthy do not get infected," added Mr Budi. 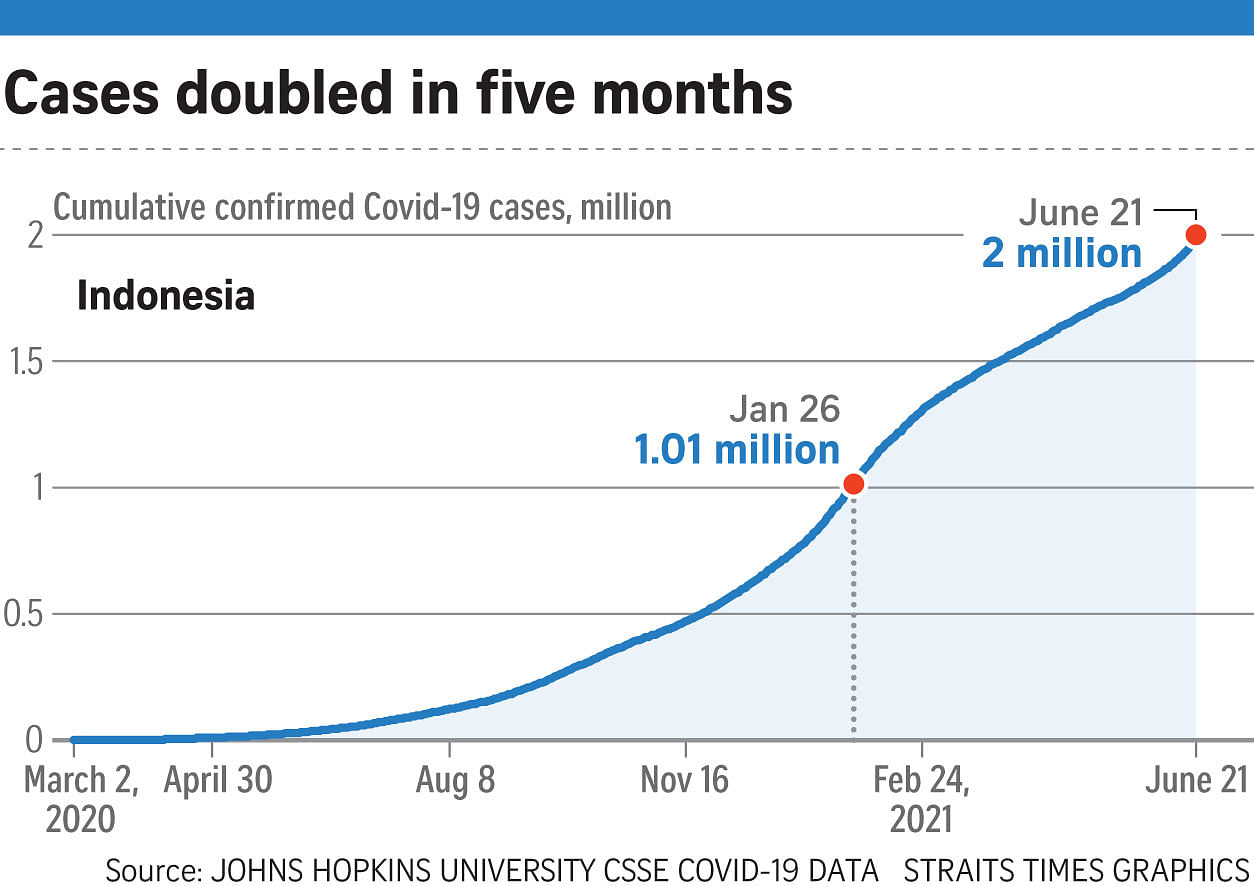 Commenting on the rising pressures on healthcare facilities in Jakarta, Mr Budi said the capital had 37,456 hospital beds, with 17,752, or 47 per cent, of them reserved for Covid-19. Nearly 90 per cent of these reserved beds were occupied as at Monday.

Mr Budi said the government could increase the quota for Covid-19 beds to 50 per cent.

Indonesia to get Pfizer-BioNTech Covid-19 vaccine from August