The Malaysia Airlines jet vanished in March 2014 while en route from Kuala Lumpur to Beijing with 239 people onboard, most of them from China.

Chinese relatives met with members of the investigation team in a marathon six-and-a-half hour session which saw many walking out in frustration while clutching hefty stacks of the report and its appendices, together totalling some 1,500 pages.

"They've given us all these documents but it's all in English, it's very difficult for us," said Gao Xianying, whose daughter, son-in-law and granddaughter were on the plane.

"I don't care where the plane is, I just care about where the people are," she told reporters.

The report was first released in Malaysia on Monday, where some angry relatives walked out of a briefing.

Others were left disappointed that no new information was offered. 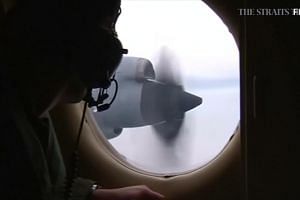 Malaysia's Flight MH370 was manipulated off course to its end, report says

"I'm not satisfied because they're shrugging (off) responsibility and hiding the truth," said Wen Wancheng, whose son was on the flight.

Officials said relatives "asked a lot of questions" but many could not be answered.

Relatives "managed to talk directly to the authorities and get their answers directly from the authorities (so) to us, that matters most," said Malaysia Airlines crisis management director Mohamad Fuad.

After years of fruitless searching in the world's most enduring aviation mystery, the report offered nothing concrete to grieving relatives of passengers and crew members hoping for closure.

"The team is unable to determine the real cause for the disappearance of MH370," concluded the largely technical document report.

The report from the official investigation team pointed to failings by air traffic controllers and suggested the Malaysia Airlines plane was likely diverted from its flight path manually, rather than due to a mechanical fault.

It said the Boeing 777 jet was airworthy and the pilots were in a fit state to fly.

The airliner's disappearance sparked the largest hunt in aviation history but no sign of the jet was found in a 120,000-square kilometre Indian Ocean search zone and the Australian-led hunt was suspended in January last year.

US exploration firm Ocean Infinity resumed the search in a different location at the start of this year on a "no find, no fee" basis, using high-tech drones to scour the seabed. That search was also called off after failing to find a trace of the plane.

Only three confirmed fragments of MH370 have been found, all of them washed up on shores in the western Indian Ocean.