JAKARTA (BLOOMBERG) - Indonesia's economy, the biggest in Southeast Asia, is getting a boost from an election campaign that's kicking into high gear.

With the first-ever simultaneous presidential and legislative elections drawing closer on April 17, spending by the government and political parties is already in overdrive.

From the printing of pamphlets to mass gatherings, election activity has intensified in the past two weeks and is set to pick up in coming days.

That's likely to give a temporary boost to economic growth, which has languished around the 5 percent mark for most of last year. Preliminary data shows a surge in government expenditure in the first two months of the year, while consumer spending - a key growth driver in a nation of 265 million people - is also climbing.

President Joko Widodo is leaving nothing to chance as he seeks to win a second five-year term, showering local governments with billions of dollars in extra funding and putting money in the pockets of voters with fuel-price caps and cash handouts.

In the first two months of this year, central government spending grew 14 per cent from the same period last year to 145.7 trillion rupiah (S$13.9 billion), with outlays for social assistance surging 70 per cent. 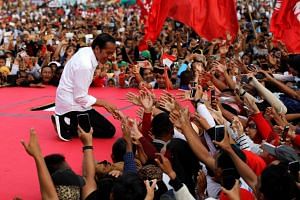 Why is Asean being ignored in Indonesian presidential elections?: Jakarta Post contributor

The government will increase fuel subsidies to 100.6 trillion rupiah this year and plans to almost double the budget for its conditional aid programme - which helps 10 million families - to 34 trillion rupiah. Transfers to regional and local governments will climb more than 9 per cent to 827 trillion rupiah.

While economic growth of about 5 per cent in Indonesia is respectable in an environment of slowing global expansion, it's well short of the 7 per cent promised by Jokowi - as the president is known - when he came to power in October 2014.

The president is eyeing growth of as high as 5.5 per cent next year, which would be the fastest pace since 2013 and up from this year's estimated 5.3 per cent.

The central bank said the fiscal boost will help the economy maintain its expansion of about 5.2 per cent in the first quarter.

"The government's fiscal stimulus for social assistance has been high, which pushes economic growth particularly in terms of consumption and people's purchasing power," Governor Perry Warjiyo told reporters in Jakarta on Friday. "The main supporting factor is strong consumption."

The spending surge may turn out to be a vote winner for Jokowi, who faces former general Prabowo Subianto in the presidential vote.

The opposition leader, known more commonly by his first name Prabowo, is behind in the polls, but is working hard to win over voters by showing his concern for bread-and-butter issues, such as living costs and jobs.

Prabowo is trailing Jokowi in voter surveys ahead of the election, but is starting to make some gains. A new poll this week showed Jokowi's support was little changed at 53.6 per cent, while Prabowo's rose to 35.4 per cent.

The economic divide in Indonesia is stark. Last year, the capital Jakarta notched up economic growth of 6.4 per cent compared to Papua, a province in the far east of the country, which contracted almost 18 per cent.

In Yogyakarta - located on the island of Java, which contributes almost 60 per cent of the nation's annual growth - the jobless rate last year was 3.35 per cent, compared to 8.17 per cent in West Java.

Josua Pardede, an economist with PT Bank Permata in Jakarta, said the 2019 election is already having an impact on consumption. Retail sales historically decline in the first quarter of the year, he said, but figures from the central bank already show a 10.9 per cent jump in February from a year ago.

Low inflation and the possibility of interest-rate cuts are helping to underpin consumer sentiment.

Consumer prices rose at the slowest pace in almost a decade in February, the currency has gained almost 2 per cent against the dollar so far this year, and economists from Goldman Sachs Group, Morgan Stanley and elsewhere predict rate cuts in coming months.

The biggest growth risks are coming from the global economy, with a slowdown in China - Indonesia's biggest trading partner - ongoing trade tensions, and weaker export demand likely to weigh on Indonesia's outlook.

"Indonesia is showing that even during the election time, the macroeconomic stability and prudence continue to be in place," Finance Minister Sri Mulyani Indrawati said last week.

"But, of course, we also understand that the headwind continues to become even more challenging. The global economic environment is not easy."