HONG KONG (BLOOMBERG) - Anwar Ibrahim, who's in line to become Malaysia's next premier, blasted Myanmar leader Aung San Suu Kyi's treatment of the Rohingya and called for formal talks on China's crackdown against its Muslim minority.

"I was appalled by the attitude of Suu Kyi these days," Anwar said in an interview with Bloomberg Television's Sophie Kamaruddin in Hong Kong.

"Buddhists, Muslims, Christians all supported her. Why must she continue to be seen to be condoning crimes against the minority?"

The United Nations has said the treatment of Rohingya in Buddhist-majority Myanmar may amount to genocide, a report that Suu Kyi's government has rejected. The crisis, which has seen more than 700,000 minority Muslims in Myanmar flee to Bangladesh, didn't even make it onto the agenda of an Asian leaders meeting in Nepal last month.

Anwar, who has an agreement to take over from Malaysian Prime Minister Mahathir Mohamad in a year or two, also spoke out about China's treatment of Turkic-speaking Uighurs.

Multiple accounts have emerged of secretive "re-education camps" that have detained tens of thousands to "upwards of 1 million" Uighurs, according to a UN committee's assessment.

While Malaysia's government raised the Uighur issue with China, officials in Beijing view it as an "internal issue," Anwar said. 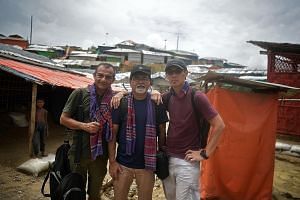 The story behind the story of Rohingya refugee camps

Trapped in a half-life, Rohingya refugees yearning to break free

"This has gone out into the mainstream media as an issue, and I believe we should use a proper forum to start highlighting these issues and seek this understanding from the Chinese authorities."

Anwar's comments amount to some of the strongest yet from a senior political leader in Asia condemning abuses of Muslim minorities. Regarding China in particular, governments in Muslim-majority countries from Saudi Arabia to Indonesia have been silent even as calls grow in the US and Europe for China to stop the alleged human-rights abuses.

That echoes its warning against US lawmakers who urged sanctions against senior Chinese officials.

Asked why Muslim governments have largely been quiet on the Uighurs, Anwar said: "They're scared. Nobody wants to say anything."

China is the largest trading partner of Malaysia and many other countries around the world. Mahathir has taken an assertive stance towards Beijing, warning against "a new version of colonialism" while cancelling billion-dollar projects backed by Chinese state companies.

Suu Kyi has faced widespread criticism for failing to protect press freedom or doing more to protect hundreds of thousands of minority Muslims. Her government has rejected the UN report calling for a genocide investigation, saying it undermined official efforts to bring peace and national reconciliation.

The UN report "will only serve to create further divisions and mistrust in Rakhine State and the entire country," Myanmar's foreign ministry said in a statement.

Anwar's criticism of Suu Kyi is more personal. Both were among Asia's most famous political prisoners, locked up repeatedly by oppressive regimes. Anwar was only released from jail in May after his coalition ended the six-decade rule of Barisan Nasional led by former Prime Minister Najib Razak.

In 2012, Anwar's wife and current Deputy Prime Minister Wan Azizah Wan Ismail sent Suu Kyi a personal letter congratulating her for an election win and asking her to use her power to help the Rohingya.

"Your voice carries much weight and I beseech you to use that voice to care for the oppressed," Wan Azizah wrote, adding: "I look forward to your rise in Myanmar, so that the fate of all your citizens including the Rohingya improve."

On Wednesday in Hong Kong, Anwar said "disgust" might be a more appropriate for how he feels about Suu Kyi. He said she wasn't even prepared to say "stop the killings."