From a diplomatic perspective, it was a bit embarrassing that Foreign Minister Retno LP Marsudi assigned her spokesperson, Arrmanatha Nasir, and the ministry's East Asia and Pacific director, Edi Yusup, to announce the visit of the new Australian leader to Jakarta.

It was probably just due to technical and administrative matters that the announcement was not made by a more senior diplomat, but it should have been conducted in a more proper way.

Or was it a reflection of diplomatic "fatigue" because this would be the third Australian prime minister that Jokowi has met in the last four years?

The Indonesian media, however, also treated the visit largely as a matter of routine, probably because we are in the euphoria of the Asian Games.

Or, is there a more substantial reason for this lack of attention?

Only three days after he staged an easy Liberal Party inner coup against former prime minister Malcom Turnbull on Friday, Morrison personally announced his visit to Jakarta to meet with Jokowi this week.

Turnbull had enjoyed a close personal relationship with Jokowi, especially after the Indonesian leader invited him for a blusukan (impromptu visit) to Tanah Abang Market, Central Jakarta, in November 2015, three months after Turnbull came to power. 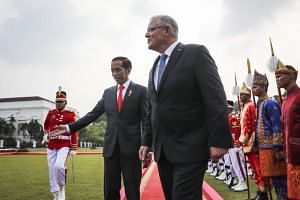 Morrison said he had chosen Indonesia as his first destination to demonstrate his high expectations from an important neighbour, although Indonesia has traditionally been the first port of call for Australia's new leaders.

"By making my first overseas visit as prime minister to Indonesia, I want to make a clear statement about the importance of our relationship, and the commitment of my government to deepening our economic and security cooperation," Morrison said.

Some Indonesians say Turnbull's defeat was a matter of karma.

He ousted Abbott, who was toppled from the premiership on Sept. 15, 2015, just two years after his Liberal Party and its coalition partner defeated the Labor Party in the Sept. 13, 2013, election.

Upon his fall, the Australian media reported that the nation already had five prime ministers in five years.

"My hope is that what happened a fortnight ago finishes all this stuff, that we get right away from this concept of changing the leader like you might change your clothes to suit the fashion," Abbott said in a radio interview.

He also compared his fall to a "revolving door" mechanism.

"The difficulty with the revolving door prime ministership is that government can't do what is necessary for the long-term good of our country if you're subject to death by polls and then ultimately a party room coup."

When Jokowi was sworn in as the the country's seventh president in October 2014, Abbott attended the ceremony.

It was a rather akward encounter with the new president because of tense bilateral relations, particularly due to the death penalty faced by two Australian drug traffickers in Indonesia.

I also remember a veteran Australian diplomat saying Indonesia was more important for his country than Australia was for Indonesia.

It is just a matter of time for Australia to be left far behind Indonesia in terms of economic power.

Hugh White, a professor from Australian National University who recently wrote in the Australian Foreign Affairs magazine, drew attention to the fact that Indonesia's economy would be three times larger than Australia's in 2030 despite its current financial fluctuation.

"Indonesia's a funny economy because in some ways it looks very disorganised - it's got a lot of corruption, it's got a bad legal system and a lot of nationalism that can inhibit trade," White said, as reported by the Australian Broadcasting Corporation (ABC).

However, Indonesia is "(…) the only one of our neighbours that's strong enough to really work with us to help to secure the region", White told the ABC.

Jokowi would certainly welcome the Australian PM warmly when they meet on Friday at Bogor Palace in West Java, because his guest will bring the much-awaited economic package, a very timely gift amid the rupiah's worrying volatility.

"Australia and Indonesia share geography, deep historical ties, a vibrant contemporary relationship and a vision of a peaceful and prosperous region. Our close collaboration across economic, security and strategic domains makes both countries stronger, safer and more prosperous," said Morrison, Australia's former treasurer and minister of immigration and border protection.

The two leaders are expected to discuss various issues such as the President's ambition on the Indo-Pacific Cooperation agenda, and the 16-nation regional Comprehensive Economic Partnership (RCEP).

But will they have a chance to meet again in a purely bilateral meeting?

Hopefully, Morrison can maintain his seat longer, because his rivals would likely be eyeing the possibility of another coup.

Jokowi's re-election bid will also be decided in April.

Prime Minister Morrison, thank you for your very meaningful present!

The Jakarta Post is a member of The Straits Times media partner Asia News Network, an alliance of 23 news media entities.