CANBERRA (REUTERS, AFP) - Australia’s incoming prime minister Scott Morrison hosed down speculation of an early election and said on Friday (Aug 24) that a severe drought across the country’s east will be his immediate priority.

“I don’t think anyone should be making any plans for an election any time soon,” Mr Morrison, the former treasurer, told reporters in Canberra.

Energy Minister Josh Frydenberg will be the new treasurer, Mr Morrison announced after winning a Liberal party leadership vote earlier in the day, ending an internecine battle that has scarred the conservative government ahead of an election due by May 2019.

Incumbent Prime Minister Malcolm Turnbull, who called the leadership meeting after losing the majority support of the party, opted not to contest the vote and said he would resign from Parliament “not before too long”, leaving the government’s one-seat majority at risk.

The Liberal party is the senior partner in the ruling conservative coalition. The Liberal-National government has consistently trailed opposition Labor in opinion polls in recent months.

Mr Turnbull’s resignation would leave the government of Mr Morrison facing a by-election for Mr Turnbull’s Sydney seat that could see it lose its one-seat majority.

“I’ll be leaving the Parliament not before too long. As I have always said. I’ve been very clear about that. It’s not a secret,” Mr Turnbull told reporters in Canberra.

The leadership battle was sparked on Tuesday by an unsuccessful challenge by Mr Dutton, who narrowly lost a vote against Mr Turnbull.

Mr Dutton, an ex-police officer and right-winger, has been the driving force behind the move to unseat Mr Turnbull after a party backlash against his more moderate approach to politics.

Under intense pressure to call a second vote, Mr Turnbull convened a party meeting on Friday after receiving a letter signed by the majority of party members calling for a change of leader.

Mr Turnbull came to power in a similar party-room coup in September 2015. A social liberal and multi-millionaire former merchant banker, he has struggled to appeal to conservative voters and only narrowly won a general election in 2016.

The unrest is the latest chapter in a turbulent decade for Australian politics, with no leader managing to serve out a full term since former prime minister John Howard lost the 2007 election.

Complicating matters, Mr Dutton was referred to the solicitor-general over his eligibility to sit in Parliament due to family financial interests in childcare centres that receive government subsidies – a possible breach of constitutional rules. 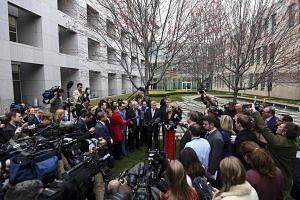 The nation’s top lawyer on Friday cleared him to continue in Parliament. If he had succeeded in taking the top job, Mr Dutton would have pushed Australian politics further to the right with a shift in several policies.

He had made clear that he would slash the migrant intake to counter population pressures, and had not ruled out withdrawing Australia from the Paris climate agreement.

The move to oust Mr Turnbull was sparked by his plans on Monday to embed carbon emissions targets in law. Coupled with the government long trailing the opposition Labor party in opinion polls, the move sparked a revolt that quickly spiralled into calls for his head.

Defence Industry Minister Christopher Pyne, a Turnbull ally, had refused to say who he would be backing and hit out at disruptive elements inside his party.

“I think some people should have considered the greater good of the people of Australia, and the government, rather than their own self-interest and ambition,” he said.

One minister was so disillusioned with the push to oust Mr Turnbull that he took to Twitter to apologise to the Australian people.

“Australia. We owe you an apology. I’m sorry. You deserve better than many of the things our Federal Parliament has served up to you for the past 10 years,” wrote Nationals MP Darren Chester, whose party is in a coalition with the Liberals.