An Indonesian teen who was recently rescued after surviving 49 days at sea in a fishing hut has actually survived not once, but thrice at sea.

In an interview with BBC Indonesia, Mr Aldi Novel Adilang, 18, said his two earlier experiences of being stranded at sea were much shorter.

His third and most recent experience captured global attention on Monday (Sept 24), when news emerged that the teen had floated all the way from Indonesia to the waters of Guam in the Pacific.

Mr Aldi had been working on a rompong, or a floating fishing trap which is shaped like a hut, on July 14, when the rope tethering him to the seabed snapped - sending him adrift.

There was no safety or navigational equipment on the rompong.

As the rompong was not a boat, it also did not have any paddles or an engine.

"My rompong's rope snapped after it rubbed against my friend's rompong," said Mr Aldi, who spoke to BBC Indonesia from his parents' house near the city of Manado in North Sulawesi.

"Unfortunately, he was asleep, so he didn't know I was adrift."

The limited food supply on the rompong lasted him only a week. 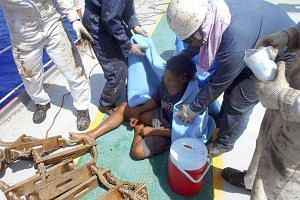 "Rice, clean water, spices, cooking gas and other supplies ran out. To survive, I caught fish and burned the rompong's wooden fences to make a fire for cooking. I even ate a raw fish," Mr Aldi explained.

The teen would wet his clothes in the sea and drink sea water through it, claiming that the salty taste of sea water was reduced by doing so.

Alone at sea for 49 days, he sang Christian songs, read the Bible he carried and kept praying, in hopes of seeing his parents again.

Finally, he was picked up by the bulk carrier Arpeggio on Aug 31. It took a week for the vessel to reach its destination, Japan.

Two days later, Mr Aldi flew back to Indonesia, where he was reunited with his family.

The teen had previously signed a one-year contract and was paid US$134 (S$183) monthly to tend to the rompong and light its lamps, which are designed to attract fish.

However, after his latest experience, Mr Aldi said he has promised himself that he would never sail again.