JAKARTA (THE JAKARTA POST/ASIA NEWS NETWORK) - Aldi Novel Adilang, 19, had one of the loneliest jobs in the world: He was a lamp keeper for a floating fish trap, 125km out at sea, with weekly brief human contact and a walkie-talkie.

On July 14, after keeping the trap for months, a hard wind blew him thousands of kilometres away from home in North Sulawesi to Guam waters. He now had to cope not only with loneliness, but also hunger, thirst and fear.

The young man, however, survived for 49 days, until a Panama-flagged vessel, Arpeggio, rescued him in Guam waters. Before that, more than 10 ships had sailed past Mr Aldi, failing to spot him as he waved for help.

The fish trap Mr Aldi was working on is called a rompong in North Sulawesi. A rompong is a fish aggregator device shaped like a modest hut. It floats in the middle of the sea, is supported by buoys and is anchored to the seabed by a long rope.

Mr Aldi was contracted by the fish trap owner to light lamps around the rompong with a power generator every night to attract fish for six months.

Every week, the owner would send someone to harvest the fish in the trap and give Mr Aldi a week's worth of supplies: Food, gas for cooking, clean water and fuel for the generator.

The Indonesian consul general in Osaka, Mr Mirza Nurhidayat, who oversaw the return of Mr Aldi after his rescue, said that since the device was not a boat, it did not have any paddle or engine.

The rope that had kept Mr Aldi's floating hut in place had torn, and the strong wind had then blown him far to the north.

"The rompong owner has many rompong, maybe 50, spread out in waters north of Manado," Mr Mirza told The Jakarta Post on Sunday (Sept 23).

As Mr Aldi was drifting away, his supply was enough only for several days, so he caught fish to stave off hunger and drank sea water.

"After he ran out of the cooking gas, he burned the rompong's wooden fences to make a fire for cooking. He drank by sipping water from his clothes that had been wetted by sea water," Mr Mirza said.

"Aldi said he had been scared and often cried while adrift," said another diplomat of the consulate in Osaka, Mr Fajar Firdaus.

"Every time he saw a large ship, he said he was hopeful, but more than 10 ships had sailed past him, none of them stopped or saw Aldi," Mr Fajar went on.

On Aug 31, the bulk carrier Arpeggio sailed past Mr Aldi, who waved his cloth again for help. At first, the ship's crew did not see him, so Mr Aldi tuned his radio to a frequency a friend of his had once told him to use in case he is blown away and sees a large ship.

Fortunately, the ship's captain caught the signal. Realising there was someone pleading for help, he turned around, said Mr Mirza.

But the waves were high that day, so the Arpeggio had difficulty getting close to Mr Aldi. After circling him four times, the ship eventually threw a rope to help him, but the rope did not reach Mr Aldi's rompong.

"Aldi then decided to jump into the sea to grab the rope, while the waves and wind rocked him," Mr Fajar said.

After weeks at sea, Mr Aldi was already very weak and almost lost the rope.

"But the ship's crew managed to catch his hand," Mr Fajar said.

Arpeggio's crew immediately gave Mr Aldi a towel and an emergency snack. Afterwards, they gave him fresh clothes and food, and the ship's cook even cut Mr Aldi's hair.

On the same day, Japanese authorities contacted the Indonesian consulate general, said Mr Mirza. His office immediately tried to find Mr Aldi's family and prepare the necessary documents for his return to Indonesia.

"We coordinated with the shipping authorities in Japan, the ship's captain, the Japanese coast guard and the immigration authorities," Mr Mirza said.

The Arpeggio docked in Japan on Sept 6 at 3pm.

But Mr Aldi had to be quarantined for health reasons, so he could not land yet. 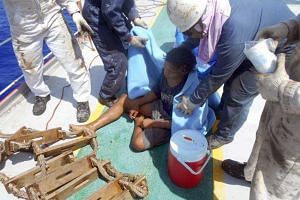 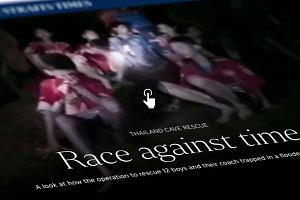 "We sent our staffer, Teguh, to accompany him and oversee all the process because of the language barrier."

Japan's coastguard had asked for all sorts of details, including the dates, the shape of the rompong, what he had been doing there and so on, Mr Mirza went on.

On Sept 7, Mr Aldi got the permission to enter Japan, and on Sept 8 he flew from Japan to Jakarta. Mr Mirza said that because of Typhoon Jebi in Osaka, his office had to bring Mr Aldi to an airport in Tokyo. The next day, he arrived in Manado.

Now, Mr Aldi is back with his family in Wori, Manado, and in good health, Mr Mirza said.

"Aldi's story is indeed dramatic, and we are thankful to all - the ship's captain and the Japanese authorities - that have been very helpful in ensuring Aldi's return."