BEIJING (BLOOMBERG) - Leaning over a metal cage stuffed with live hens in Shanghai, Ran looked for just the right specimen for her chicken soup.

The 60-year-old was shopping at one of China's wet markets, where sales of freshly slaughtered, unpackaged meat have become the focus of an investigation into an outbreak of a potentially deadly lung virus.

Three people have died and more than 200 have been infected by the virus, a cousin of the cause of severe acute respiratory syndrome, or Sars, which killed almost 800 people 17 years ago.

Known as 2019-nCov, the new coronavirus was first found in people who shopped or worked at a wet market in the central city of Wuhan. The pathogen may have been transmitted to humans from live animals sold there.

Sixty years after the Asian influenza pandemic and almost two decades after Sars, China remains ground zero for the emergence of many dangerous new infections.

Asia's wet markets, where shoppers mingle in narrow spaces with everything from live poultry to snakes, are seen as a key reason why.

China has made strides in monitoring and detecting infectious diseases since Sars and tightened controls on the sale of exotic animals, considered nourishing in some parts of the country. Yet the markets, which offer conditions that can set off potentially deadly contagions, remain popular and a central part of life in many cities.

"Freshly killed hens are much better than frozen meat in supermarkets, if you want to make perfect chicken soup," said Ran, who did not want to give her full name. "The flavour is richer."

Preference for fresh meat from animals that aren't properly quarantined or from the wild "does make China susceptible to the risk of new virus outbreaks through close animal and human contact," said Wang Yuedan, a professor of immunology at Peking University's School of Basic Medical Sciences. "The same is true for Ebola, which came about as a result of eating animals from the forest in Africa."

With the surging number of new Chinese cases and infections found in Thailand, Japan and South Korea, fears are growing that spread will intensify as hundreds of millions of Chinese travel for the Spring Festival holiday this week.

Wet markets are often thronged as fresh meat is procured for the lavish, banquet-style feasts that mark the start of the Chinese New Year. 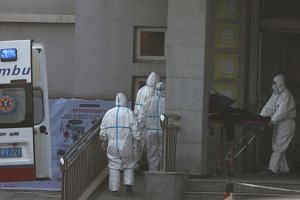 It's also a peak travel season for Chinese citizens, as the full week of public holidays gives time for trips abroad. Airports around the world have put in place measures to screen arriving travellers for symptoms like fever and coughing.

Over the weekend, the Shanghai wet market was crowded with more than a hundred customers inspecting and choosing chickens, which were then taken to an adjacent stall for on-site killing. The markets, typically large open buildings, also commonly offer seafood and pigs, as well as fruits and vegetables.

More exotic creatures like snakes and marmots are harder to spot since the days of Sars - thought to have spread through civet cats - but are sometimes sold surreptitiously.

While the outbreak has rattled equity markets, the virus is likely not as deadly or infectious as Sars. There are signs of spread from person-to-person, but it doesn't seem to do so easily, said Takeshi Kasai, World Health Organisation regional director for the Western Pacific, in an interview with Bloomberg TV.

Chinese authorities said that the outbreak is "still preventable and controllable."

"If this were as infectious as influenza, we would expect to see more rapid spread around China and globally," said Raina MacIntyre, professor of global biosecurity at the University of New South Wales. "Having said that, viruses can mutate and change during the course of an epidemic."

China is closely acquainted with deadly pathogens. The Asian flu pandemic that emerged from wild ducks in 1957 killed as many as 2 million people globally, according to the WHO.

Sars may have spread from bats to humans via masked palm civets and other species in live-animal markets before it began infecting people.

Two strains of avian flu in the past decade also may have emerged from a poultry market and a goose farm.

China has come a long way since Sars, when the country was criticised for initially providing limited information and denying the scope of the problem. The epidemic revealed how poorly the nation was prepared to respond to infectious disease threats.

Since then, police and market regulators have launched crackdowns on the underground trade of wild animals, prohibiting the hunting and sale of endangered, rare and protected species. The government has opened up labs and networks to identify infectious pathogens. Ironically, its flagship lab is in Wuhan.

Still, rapid urbanisation and a dramatic increase in the movement of people and goods has meant that disease outbreak events happen every week in the west Pacific region, according to a WHO statement.

China's vast size and population presents its policy makers with a Sisyphean-like task in trying to eradicate the threat from its wet markets. The virus outbreak comes as the country also faces African swine fever, the deadly pig disease that doesn't harm humans but has devastated the pork industry.

Liu Yuanfei, who used to be a regular shopper at the Wuhan wholesale market where the virus is suspected to have emerged, recalls seeing live crocodiles, hedgehogs and deer there. Despite what's happened, he's sorry to see it shut down.

"When some crisis happens, people start to ask why, why, why," said Liu. "But the existence of the market is driven by demand. As long as there's demand, even if it doesn't show up here, it will show up somewhere else."