HONG KONG (WASHINGTON POST) - The city of Hong Kong, home to 7.4 million people, has been in the spotlight for weeks because of teeming protests.

Experts say the urban hub is still safe for tourists and the US State Department places it in its lowest-risk category, but there are questions and things to be mindful of for those passing through.

Minor disruptions are possible, and visitors should remain aware of unfolding demonstrations.

Here's what travellers in the area - which is officially a "special administrative region" of China - need to know.

What is going on with the protests?

Weeks of mostly peaceful protests escalated on Monday (July 1) when some demonstrators broke through barricades and glass to get into the Legislative Council building.

Before police forced them out, they scrawled graffiti and caused what the authorities described as extensive damage.

Hundreds of thousands also marched peacefully on Monday on roads around the city, the anniversary of the handover from British rule to Chinese sovereignty.

Those demonstrations followed several days of protest in June, including one that drew nearly two million people, according to estimates.

The rallies were originally prompted by a proposal to allow suspected criminals to be extradited to mainland China, which had been tabled.

But the issues have grown beyond the extradition Bill to include the way protesters have been treated by police, the way leaders in Hong Kong are chosen and Beijing's pull over the semi-autonomous city.

Will there be more protests?

Details about future demonstrations are unclear. In a statement, protesters said they would continue to push for their cause.

A statement read: "Unless universal suffrage and a just election system are in place, we shall never stand down."

"The latest protests in Hong Kong have exposed underlying anger among some people, especially young people, in the territory over what they view as eroding freedoms," Mr Lee Ridley, a Singapore-based senior intelligence manager at risk management firm WorldAware, said in an e-mail.

"Demonstrations - though maybe not as violent as in recent days - are likely to continue in the near term, though they are unlikely to impact business operations or travel to Hong Kong significantly."

What should travellers do when there are demonstrations?

Ms Erika Weisbrod, director of security solutions for Americas-based clients at International SOS, says that while she understands some tourists might be inclined to go to demonstrations to watch or take pictures and videos, she cautions against protest sightseeing.

"It's still always our bottom-line advice to avoid all demonstrations as a precaution."

Mr Ridley said visitors should stay vigilant by reading local news in the morning and using notifications provided by an employer or travel agency, if that applies.

Large-scale protests have typically been announced in advance, but in some cases, there is little warning of demonstrations organised by activists in online forums and messaging apps.

"The protests since June 12 have seen activists use different tactics - frequently moving between locations or temporarily blocking roads, for example - so it is advisable to avoid likely protests venues to the extent possible to minimise exposure to any demonstrations that occur," Mr Ridley said in his e-mail.

If people do find themselves in the vicinity of a protest, Ms Weisbrod said, they should relocate quickly. 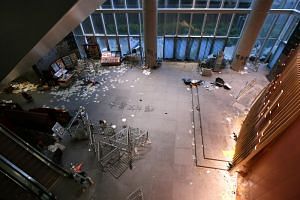 Lull in Hong Kong demonstrations as protesters evaluate next step

Hong Kong gets back to work as protesters lie low for now; repair of legislative building could cost over $1.7 million

Visitors should follow commands of police or other authorities: "If police are saying, 'Move away from this area' or 'Don't go down this street', the most important thing to do is comply with those directives," she says.

Without a clear path to get away, Mr Ridley said, tourists should stay inside or find a non-government building and avoid the main lobby area.

What has the effect been on tourists?

Some rail stations have closed temporarily because of the activity, and marches and roadblocks have disrupted ground transportation, potentially interfering with visitors' ability to move through the city. Airport access has not been a problem.

"For most travellers, travel can continue as normal," Ms Weisbrod says.

Popular tourist sites have not been a direct focus of any of the protests, but, Mr Ridley said, some demonstrations have been near areas where travellers might go.

Monday's protest march, for example, covered roads in the Wan Chai district, and government officials closed off the area around the Golden Bauhinia Square attraction.

The area is full of bars and restaurants, so any roadblocks or traffic snarls are disruptive.

"Protests that have turned violent have primarily taken place at the Legislative Council, Central Government Complex and nearby roads in the Admiralty neighbourhood," he says.

"These sites are near several international hotel brands and popular shopping centres on Hong Kong Island."

Even if travellers are staying near areas where protests are taking place, Mr Ridley said, the activists' focus on government buildings and roadblocks means those visitors should not feel much of an effect.

What are foreign governments telling their citizens about visiting Hong Kong?

The State Department places the territory at a Level 1 (of 4), its travel advisories' lowest-risk category, but urges travellers to sign up for alerts through the Smart Traveller Enrollment Programme.

In a demonstration alert issued on Monday, the US Consulate General in Hong Kong and Macau listed areas where protesters were gathering, warned of some road closures and blocked areas, and cautioned that recent protests had "intermittently turned confrontational".

The alert said Americans in Hong Kong should avoid the areas where the protests were taking place, use caution if unexpectedly ending up around a demonstration, monitor local press for updated information and "keep a low profile".

Britain's Foreign and Commonwealth Office gave a heads-up on June 28 that a protest was expected on Monday.

"Further demonstrations may take place in the coming weeks, particularly around government buildings, and large sections of the city may be closed off and public transport affected," the advisory said.

"The situation remains unpredictable, so you should remain vigilant and keep up to date with developments."

What is it like to be in Hong Kong right now?

Ms Clarissa Wei, a journalist based in Hong Kong, says the day-to-day rhythm of life has been unaffected, with public transportation working normally.

When the transit system, known as the MTR, skips one or more stops because of protests, there is notice.

"While small and dense, Hong Kong as a whole is largely peaceful; the violence seen online and on TV is isolated and sporadic, and travellers haven't been affected much," Ms Wei said in an e-mail.

"I personally work and commute through the centre of the city on the daily, have flown in and out multiple times in the course of the month, and haven't encountered any disturbances at all."

She added: "It's important to note that all of the violent incidents and the anger are directed at a specific cause, and the general public and travellers are not targets or in any danger."

How many tourists visit Hong Kong?

According to numbers from the Hong Kong Tourism Board, nearly 30 million people visited the city between January and May.

The vast majority, about 23.5 million, were from mainland China, while nearly 3.6 million were from nearby countries such as Japan and the Philippines.

The overall numbers represent a 15 per cent increase over the same time period in 2018, most of it driven by growth from mainland China.

Tourism experts are concerned that the protests might slow arrivals from mainland China, the South China Morning Post reported.

"The vast bulk of people like destinations that seem to be calm, seem to be safe," Dr Brian King, associate dean of the School of Hotel and Tourism Management at the Hong Kong Polytechnic University, told the newspaper.

"Any disturbance, or political or natural disaster, will deter some people from travelling. It will have some impact."