TOKYO - United States President Donald Trump said on Monday (May 27) that he will bide his time and is in no rush to enter a trade deal with China, pointedly refusing to cool the tensions between the feuding economic giants.

With Japanese Prime Minister Shinzo Abe beside him, Mr Trump added that he was hopeful for an imminent breakthrough in ongoing trade talks with Japan, which he has repeatedly rapped for its substantial trade surplus of US$67.6 billion (S$93 billion) last year.

Mr Trump, whose recent delay of a hike in Japanese auto tariffs to 25 per cent on the grounds of national security will tide Mr Abe through a parliamentary election in July, signalled on Monday that he wanted a major announcement in August. He is on a four-day state visit to Japan.

Trade was the dominant issue in Mr Trump’s bilateral talks with Mr Abe and at Monday’s joint news conference, where he said that Beijing had more to lose in the unfurling trade spat than Washington.

“I think they probably wish they made the deal that they had on the table before they tried to renegotiate it,” he said. “They would like to make a deal, we are not ready to make a deal. And we are taking in tens of billions of dollars of tariffs and that number could go up very, very substantially, very easily.”

However, Mr Trump said there was a very good chance of clinching a deal with China given that businesses are leaving the country “by the hundreds, by the thousands, and going into areas that are non-tariffed”.

In response, Chinese Foreign Ministry spokesman Lu Kang called for mutual respect at a regular news briefing in Beijing on Monday. He said: “China has always believed that the differences between any two countries should of course be resolved through friendly consultations and negotiations.”

He added that the Chinese position has been as consistent as the US’ has been erratic: “Sometimes, it is said that an agreement will be reached soon, and sometimes that it is difficult to reach an agreement.” 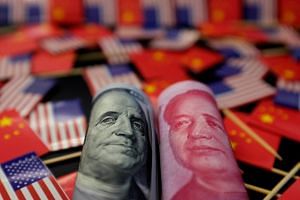 US-China trade war: China won't give in to an unequal deal

China accuses US officials of misleading public on trade war

Mr Abe, for his part, called for continual dialogue so that the US and China can find a “constructive solution” to their dispute.

Mr Trump has threatened fresh duties on another US$325 billion worth of Chinese goods.

On Monday morning, Mr Trump and his wife Melania had an audience with Emperor Naruhito and Empress Masako at the Imperial Palace as the first state guests of the Reiwa (beautiful harmony) imperial era that began this month.

Mr Trump and Mr Abe then met for bilateral talks before meeting family members of Japanese who were abducted by North Korean agents in the 1970s and 1980s.

He praised Japan’s order of 105 brand new F-35 stealth aircraft – first spelt out in revised national defence programme guidelines approved last December, that will “give Japan the largest F-35 fleet of any US ally”.

Mr Trump, who also watched a sumo wrestling tournament with Mr Abe on Sunday, on Monday paid homage to Japan’s heritage, and said he felt “profoundly honoured” to be received by the new Emperor.

“Japan’s time-honoured customs and exquisite culture fill us with a deep sense of admiration,” he said.

On Tuesday (May 28), Mr Trump will address US troops at a US Navy base in Yokosuka, south of Tokyo, before he leaves Japan.