That will change if Mr Trump follows through with his threat to tax nearly every product China sends to the United States, or roughly US$300 billion worth of goods. The US trade representative on Monday (May 13) detailed a list of what would face a tax of as much as 25 per cent, which includes nearly 4,000 product categories.

Mr Trump said on Monday that he had not yet decided whether to impose the tariffs, but his administration has begun the formal process necessary for the US to make good on his threat.

So what would get hit with tariffs? The list reads like a shopping list for Target or Walmart, including toys, shoes, coffee makers and watches. Smartphones, photocopiers and video game consoles will face a tax. Also included are guns, fireworks, backgammon, Christmas decorations, practical joke toys, furs (with or without paws) and merry-go-rounds.

The list includes nearly 40 Chinese import categories that Americans collectively spent US$1 billion or more on in 2017, according to government statistics. The largest among those, at US$44.5 billion, are cellphones, followed by laptops at US$37.2 billion and toys at US$12.2 billion. 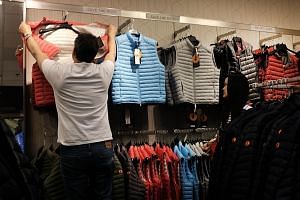 Shoppers in US likely to pay more as tariffs kick in

Here's a quick scan of other consumer favourites that will be subject to tariffs if Mr Trump follows through:

- Shoes, including golf shoes, boots, running shoes and other footwear

- Wigs and facial hair made of human hair

- Military rifles, shotguns and their parts

Mr Trump has insisted that the tariffs will not raise prices for consumers, saying that China will bear the brunt of the taxes, a view that many economists dispute.

On Monday, Mr Trump encouraged companies to avoid tariffs by moving production out of China and into the US or a country like Vietnam. He said the next round of tariffs represented "a tremendous amount of money that would come into our country".

Shifting production across borders would be difficult for some consumer-facing companies to do quickly, said Mr Alan Detmeister, an economist at UBS and former head of the price and wage section at the Federal Reserve.

That means consumers could have little choice but to pay more for those goods, or buy fewer of them. It is likely that the result will be higher consumer inflation.

Goldman Sachs economists expect 25 per cent tariffs on remaining Chinese goods could push up inflation - now at 1.6 per cent on a core basis - by half a percentage point.