The draft proposal from the Navy recommends that the Pacific Fleet conduct a series of operations during a single week in November that would involve American warships, combat aircraft and troops to demonstrate that the US can counter potential adversaries quickly on several fronts, CNN said.

"We plan for a variety of contingencies and different operations, but we do not comment on future operations," said US Navy Captain William Kafka, spokesman for the Indo-Pacific Command.

The proposal was being driven by the military, CNN reported.

The plan suggests sailing ships and flying aircraft near China's territorial waters in the South China Sea and Taiwan Strait in freedom of navigation operations to demonstrate the right of free passage in international waters, the report said.

China has publicised a series of military exercises in recent months, with President Xi Jinping presiding over the country's biggest-ever fleet review in April. 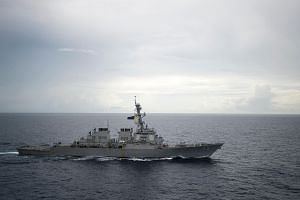 US Vice-President Mike Pence to tell China: 'We will not be intimidated in South China Sea'

Earlier this week, the US accused China's navy of "unsafe and unprofessional" conduct near an occupied reef in the South China Sea after a Chinese destroyer manoeuvred close to the bow of an American warship attempting to assert navigation rights.

While close encounters between US and Chinese forces are hardly unprecedented, the incidents were seen as the latest indication of rising tensions between the two sides.

The US Navy proposal focuses on operations in the Pacific, but the CNN report said they could stretch as far as the western coast of South America, where China is expanding investments and diplomatic relationships.

If the initial proposal was approved, the missions could be expanded close to Russian territory, it said.