WASHINGTON (AFP) - An American warship has sailed through waters off the contested Spratly Islands in the South China Sea, the Pentagon said on Sunday (Sept 30), in the latest implicit challenge to Beijing's sweeping territorial claims in the region.

The 12 nautical mile distance is commonly accepted as constituting the territorial waters of a landmass. Beijing claims all of the Spratly chain.

There was no immediate reaction from China, but a similar US operation in July, involving the disputed Paracel islands, prompted a furious Beijing to deploy military vessels and fighter jets.

The Paracels, north of the Spratly Islands, are claimed by China, Taiwan and Vietnam.

On May 25, the guided-missile destroyer USS Dewey sailed less than 12 nautical miles from a reef in the Spratly archipelago. 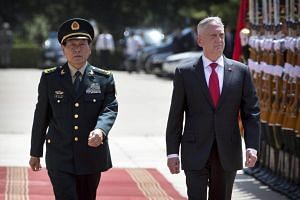 China claims nearly all of the South China Sea, though Taiwan, the Philippines, Brunei, Malaysia and Vietnam all claim parts of it.

Further angering those claimants and the US, Beijing has moved aggressively to build reefs into artificial islands capable of hosting military planes.

US-Chinese relations have been strained on multiple levels since Mr Donald Trump became President in 2017. A trade war launched by Mr Trump has infuriated Beijing, as did his authorisation of a US$1.3 billion (S$1.78 billion) arms sale to Taiwan, which China considers a rebel province.