Mr Kim has committed to denuclearisation and to suspending nuclear or missile tests, South Korea’s National Security Office head Chung Eui Yong told reporters at the White House after briefing US officials on talks between Seoul and Pyongyang.

In response, the White House said Mr Trump will accept the invitation to meet Mr Kim at a place and time to be determined. Should the meeting take place, it will be the first between a sitting US president and a North Korean leader.

White House spokesman Sarah Sanders said: “President Trump greatly appreciates the nice words of the South Korean delegation and President Moon (Jae In). He will accept the invitation to meet with Kim Jong Un at a place and time to be determined."

"We look forward to the denuclearisation of North Korea. In the meantime, all sanctions and maximum pressure must remain,” she said in a statement.

A meeting between Mr Kim and Mr Trump, who have exchanged bellicose insults in the past year that have raised fears of war, would mark a dramatic breakthrough in efforts to resolve the tense stand-off over North Korea’s effort to develop a nuclear-tipped missile capable of hitting the US mainland.

“I told him (Trump) in our meeting that North Korean leader Kim Jong Un said that he’s committed to denuclearisation,” Mr Chung said.

“Kim pledged that North Korea will refrain from any further nuclear or missile tests. He expressed his eagerness to meet President Trump as soon as possible.

"President Trump appreciated the briefing and said he would meet Kim Jong Un by May to achieve denuclearisation.”

Mr Chung did not provide any information on where the meeting would be.

Japanese Defence Minister Itsunori Onodera said in response to the announcement that North Korea must commit to abandoning nuclear development completely in order for meaningful talks to take place with Pyongyang. 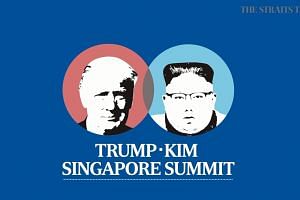 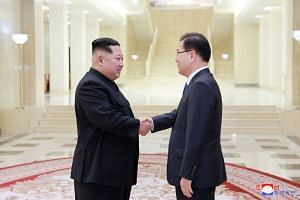 History of failure: Past efforts to negotiate on North Korean disarmament

Mr Chung and National Intelligence Service chief Suh Hoon flew to Washington earlier on Thursday to explain North Korea’s stance on possible future talks with Washington and the prospect of Pyongyang suspending nuclear tests if the security of the North’s government is assured.

Mr Trump’s aides have been wary of North Korea’s diplomatic overtures because of its history of reneging on international commitments.

Earlier on Thursday, US Secretary of State Rex Tillerson said that though “talks about talks” might be possible with Pyongyang, denuclearisation negotiations were likely a long way off.

Earlier, in his first impromptu visit to the White House briefing room on Thursday, Mr Trump said South Korea will make a major announcement in the coming hours.

Mr Trump said he had spoken to President Moon, but did not give more details.

South Korea announced on Tuesday that the North had stated there was no reason to hold on to its nuclear weapons "if military threats towards the North are cleared and the security of its regime is guaranteed".

The North is open to "frank" talks with the United States on denuclearisation and would suspend missile and nuclear tests while dialogue was under way, Mr Chung said after returning from a meeting in Pyongyang with Mr Kim.

Mr Trump welcomed the offer as "very positive". However his Director of National Intelligence Dan Coats told Congress he was quite sceptical, and Vice-President Mike Pence said the US position towards North Korea would not change "until we see credible, verifiable, and concrete steps towards denuclearisation".

But at the White House, there was growing recognition that the North Korean offer of talks and South Korean desire to have them had put the United States under pressure to talk to the North, and that unless North Korea resumed aggressive activity such as missile launches, Washington would likely take up the offer, a senior US official said.

However, it was unclear at what level or how soon.

The South Korean officials, who met Mr Kim on Monday in Pyongyang, met a large group of US administration officials, including National Security Adviser H.R. McMaster, Defence Secretary James Mattis, Mr Coats and officials of the US Treasury.

"Today I had the privilege of briefing President Trump on my recent visit to North Korea. I’d like to thank President Trump, the vice president and his wonderful national security team including my close friend General McMaster. 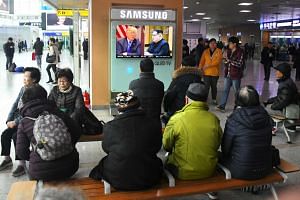 I explained to President Trump that his leadership and his maximum pressure policy together with international solidarity brought us to this juncture. I expressed President Moon Jae In’s personal gratitude for President Trump’s leadership.

I told President Trump that in our meeting, North Korean leader Kim Jong Un said he is committed to denuclearization. Kim pledged that North Korea will refrain from any further nuclear or missile tests.

He understands that the routine joint military exercise between the Republic of Korea and the United States must continue and he expressed his eagerness to meet President Trump as soon as possible.

President Trump appreciated the briefing and said he would meet Kim Jong Un by May to achieve permanent denuclearization.  “The Republic of Korea, the United States and our many partners around the world remain fully and resolutely committed to the complete denuclearization of the Korean peninsula.

Along with President Trump we are optimistic about continuing a diplomatic process to test the possibility of a peaceful resolution.  “The Republic of Korea, the United States, and our partners stand together in insisting that we not repeat the mistakes of the past, and that the pressure will continue until North Korea matches his words with concrete actions. Thank you.”