The envoys delivered Mr Moon's intention to hold a summit with Mr Kim, and the two Koreas made a "satisfactory agreement" at the meeting that took place in a "compatriotic and sincere atmosphere," North Korea's state-run Korean Central News Agency said.

Mr Kim ordered his officials to quickly take steps for the agreement he reached with the envoys, KCNA added, without providing further details.

The meeting at the headquarters of the Workers' Party in Pyongyang was also attended by Mr Kim's wife Ri Sol Ju, sister Kim Yo Jong, and other North Korean officials.

The heads of South Korea's security and intelligence services were in the North Korean capital to persuade Mr Kim to start talks with the US on denuclearisation and stave off a potential conflict over his nuclear program. They will return to Seoul later Tuesday.

A Blue House official told reporters in Seoul there were some achievements from the meeting that were "not disappointing" but did not elaborate on what they were.

The South Korean envoys are due to travel to Washington later this week to discuss the results of their discussions with the Trump administration.

Their two-day trip follows a visit by Mr Kim's sister to South Korea last month, when she invited President Moon to North Korea to meet her brother for what would be the first inter-Korean summit for 11 years. Mr Moon then avoided an immediate answer, suggesting that the two Koreas make it happen by creating the right circumstances.

The Winter Olympics - including the Paralympics that run March 9-18 - have provided a window to rebuild diplomatic ties after an escalating series of North Korean weapons tests last year prompted United Nations sanctions and threats of military action by U.S. President Donald Trump. While both the US and North Korea say they're open to talks, it's unclear how much either side is willing to concede. 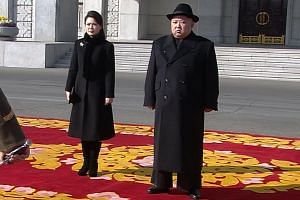 "It places much importance on the envoys' visit while continuing his peace offensive tactics toward the South and portraying his country as normal, modern, and peace-loving."

Japanese Foreign Minister Taro Kono told reporters in Tokyo that it's important for efforts to be made in the talks toward denuclearisation, Kyodo News reported.

Chinese Foreign Ministry spokesman Geng Shuang told reporters in a regular briefing in Beijing earlier Monday that China hopes the interaction between the two Koreas could bring about talks between North Korea and US. He added that China stands ready to play a positive role to realise denuclearisation and achieve lasting peace on the peninsula.

Mr Trump and Mr Moon spoke about the situation in a 30-minute phone call last week. The White House said the leaders "noted their firm position that any dialogue with North Korea must be conducted with the explicit and unwavering goal of complete, verifiable and irreversible denuclearization."

"We have intention to resolve issues in a diplomatic and peaceful way through dialogue and negotiation, but we will neither beg for dialogue nor evade the military option claimed by the US," the spokesperson said.