OSAKA (BLOOMBERG) - Prime Minister Theresa May has warned British mobile operators to weigh up the impact of US President Donald Trump's crackdown on Huawei Technologies Co, amid concern that the UK telecom industry could be vulnerable to any escalation in the US-China trade war.

The issue is critically important for businesses such as BT Group Plc and Vodafone Group Plc, some of Huawei's biggest clients, which are in the process of rolling out next-generation 5G services.

Mr Trump's administration has argued that Huawei's connections to the Chinese government mean it could allow Beijing to spy through its equipment, and has urged countries around the globe to avoid the company while developing 5G networks. Huawei has repeatedly denied that it spies for the government.

The US has put Huawei on an export blacklist, a process known as entity listing, which threatens to disrupt the supply chain for British companies.

UK officials are trying to establish how badly Mr Trump's ban will hit British operators and are concerned that the US could take more damaging steps in the future, according to people familiar with the matter.

"The decision by the United States for Huawei to be put on the entity list has obviously brought another factor into this issue, and individual companies will be wanting to consider what the impact of that has," Mrs May told reporters during her trip to Japan for the Group of 20 (G-20) summit.

Mr Trump's action has further complicated an already sensitive UK government review of the telecom supply chain ahead of the roll-out of 5G mobile networks. 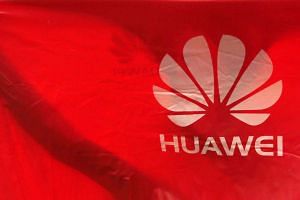 Huawei tells British Parliament it's no security threat, aiming to avoid a ban

Trump says US and UK will reach agreement on Huawei

That review was due to be completed earlier this year, weighing up the security considerations affecting Huawei's potential involvement, but has been delayed.

Mrs May's imminent departure, and the US entity listing, make it more likely that the decision will be left to whoever replaces her as prime minister, though it is still possible that she concludes the process and announces the findings before leaving office at the end of July, one of the people said.

In Osaka, Mrs May was asked if Mr Trump's actions had made the UK government's review pointless. One fear is that British companies could be forced to ditch Huawei for their own operational reasons.

"We want to ensure that we get a diversification in the market for the future," Mrs May told the BBC. "Of course individual companies will be making decisions about their own roll-out of 5G and we have yet to see the full impact of the US entity listing of Huawei."

Another person familiar with the UK's position said it was possible Mr Trump would decide to remove Huawei from the blacklist.

Mrs May said the review will be published "in due course."