HONG KONG - After 16 hours of protests where thousands lay siege to the police headquarters in Wan Chai, tensions eased and the cleanup work began on Saturday morning (June 22).

Officers were seen at 7am cleaning up the debris and metal barricades that were secured with cable ties by protesters who used them to cut off access to the complex.

Trucks were also called in to remove the metal barriers while other officers covered up abusive graffitti with black plastic bags.

The cleanup work came after thousands of protesters started clearing out at 2.40am after they surrounded the entrances of the police headquarters for some 16 hours, during which about 100 police staff were trapped.

In a harsh statement issued soon after 4am, the police said they "have shown the greatest tolerance to the protesters", but "their means of expressing views have become illegal, irrational and unreasonable".

"Police will stringently follow up on these illegal activities," the statement said without giving further details.

On Friday morning, an initial crowd of hundreds of protesters had assembled at the government headquarters in Admiralty, where a group had earlier camped out overnight.

Shortly before 11am, they took over Harcourt Road next to the government central offices, which were closed on Friday in anticipation of the protests.

Hundreds of the protesters then marched to the police headquarters about five minutes away, blocking out Arsenal Street and Gloucester Road.

Besides disrupting traffic, the police said the protesters had severely affected police work and the provision of emergency services to the public. Police could not handle 60 calls to its hotline due to the siege.

Nine female and four male staff were unwell and were taken to hospital for treatment, but with considerable delay during the blockade last night, the authorities said.

The protesters also threw eggs at officers and the building, splashed oil onto officers, and covered closed-circuit television cameras with adhesive tape.

They had openly called for escalation on Friday, after the government failed to meet their demands by a 5pm Thursday deadline.

Tensions peaked on June 12 when the Bill was to be tabled for a second reading, with protesters surrounding the government complex to prevent lawmakers from entering. 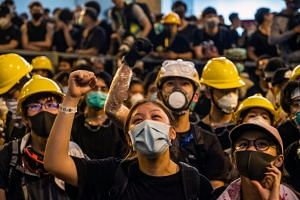 Violent clashes broke out, with some protesters throwing bricks and metal poles at police officers, who retaliated with rubber bullets and tear gas, leaving 80 people injured and 32 arrested. Eight were later released unconditionally.

The June 12 protest came amid two massive rallies - June 9 and June 16, where millions marched to protest against the Bill, which they fear will allow Beijing to seek the extradition of people, including journalists or political activists, on trumped-up charges.

The divisive extradition Bill, mooted in February, was intended to allow Hong Kong to send fugitives to jurisdictions it does not have such agreements with, including mainland China.

But those opposing this are concerned that the opaque Chinese legal system could mean people in Hong Kong could be targeted under the Bill without receiving a fair trial or human rights protection.

Chief Executive Carrie Lam, who has publicly apologised twice for her handling of the situation, had tried to allay such fears, saying the proposed changes - initiated by her, and not Beijing - were in line with international norms meant to prevent the city from becoming a haven for fugitives.

She had pointed out that the proposed amendments were watered down twice and that the government, after listening to public feedback, had put in place additional safeguards.

Still, many did not accept these explanations and took to the streets to show their anger.