In blistering heat of  over 30 deg C, protesters pushed police crowd control barriers to block the entrance to the forces' headquarters.

Chanting “release the people” and "police, disgrace", the protesters clapped with vigour between spurts of booing at the police. They demanded that Police Commissioner Stephen Lo meet them.

Activist Joshua Wong, a prominent figure of the 2014 “Occupy Movement”, had earlier called on protesters to encircle the police headquarters, leading protesters to move in the direction of the police HQ,  which is farther down on the other side of the road from the LegCo complex.

The protesters surrounded a police van outside the compound. Some protesters shouted at lawmaker Fernando Cheung, who was trying to persuade the crowd to allow the vehicle to move.

Yolanda Yu, senior superintendent of the police public relations branch, said negotiation experts tried to persuade the protesters to leave. But repeated efforts to talk to the protesters were met with booing and jeering from them.

Police said emergency services on Friday afternoon were delayed - nearly 30 calls could not be attended to immediately due to the protest.

Earlier on Friday, hundreds of young protesters, mostly in black T-shirts and masks, flooded onto Harcourt Road - a major artery running through the city’s commercial district - and used police cones to barricade the road as they shouted slogans against the government.

Protesters had vowed to escalate matters and cut off access to the roads surrounding the government central offices in Tamar, Admiralty, until their list of demands are met.

They are calling for a complete withdrawal of a proposed extradition law - plans for which have been indefinitely suspended - for the June 12 protests not to be categorised as a riot, for everyone arrested for rioting to be released, for the police to be investigated for excessive use of force during the protests, and for Chief Executive Carrie Lam to step down.

It had started as a quiet gathering as protesters streamed towards the LegCo complex early on Friday morning, joining others who had camped there overnight after the administration ignored a deadline the previous day to withdraw the controversial extradition Bill.

Student Kenneth Lau, 16, said he was with friends and would “do whatever it takes” until Mrs Lam responds to protesters.

“Why is she keeping quiet? She needs to talk to us and properly explain why police treated students this way last week,” he said, referring to the police's firing of rubber bullets and tear gas.

High school student Winnie Choi, 16, said on Thursday night:  "Although this may not result in any change or get Carrie Lam to have a dialogue with us, it's better that we come over to see how we can be of help than stay at home and watch things unfold."

The government offices were closed on Friday, in anticipation of the street rallies.

Protest organisers also read out a letter from a supporter in Taiwan who also sent over a box of snacks with notes of encouragement.

On social media and posters stuck on the glass panels of buildings near the LegCo complex, the same message echoed - "We do not disperse if the Bill is not fully withdrawn."

On Friday afternoon, hundreds of protesters briefly blocked the main entrance of  the Inland Revenue Department building in Wan Chai, following calls on social media for protesters to gather there.

Some workers from the building were reportedly prevented from entering to return to their work.

Due to road blocks in Admiralty and Wan Chai, some bus routes had to be diverted, and some services delayed.

Given that the government has indefinitely suspended plans for the Bill, it will automatically lapse when the current Legislative Council's four-year term ends in July 2020. But the protesters insist that the Bill be scrapped.

On Friday morning, Secretary for Justice Teresa Cheng issued a written apology over the extradition Bill, becoming the third official after Mrs Lam, and Secretary for Security John Lee, to say sorry over the government’s performance.

“We promise to adopt a most sincere and humble attitude to accept criticisms and make improvements in serving the public,” the Justice Secretary said. 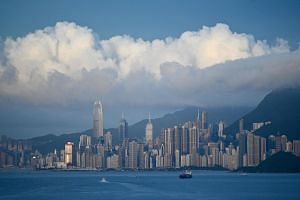 The divisive extradition Bill, mooted in February, was intended to allow Hong Kong to send fugitives to jurisdictions it does not have such agreements with, including mainland China.

But Hong Kongers' distrust of the Chinese legal system fuelled fears that they could be targeted under this law without receiving a fair trial or human rights protection.

Mrs Lam, who has publicly apologised twice for her handling of the situation, had tried to allay such fears, saying the proposed changes initiated by her, and not Beijing, were in line with international norms meant to prevent the city from becoming a haven for fugitives.

Security Secretary Lee had said that the proposed amendments were watered down twice and that the government, after listening to public feedback, had put in place additional safeguards.

Tensions peaked on June 12 when the Bill was to be tabled for a second reading, with protesters surrounding the government complex to prevent lawmakers from entering.

Violent clashes broke out, with some protesters throwing bricks and metal poles at police officers, who retaliated with rubber bullets and tear gas.

More than 80 people were injured and 32 were arrested. Eight of those arrested were later freed unconditionally.

Amnesty International said on Friday it has collected footages and verified 20 of them concerning 14 incidents of excessive use of force by police during the June 12 protest.