TAIPEI - Taiwan President Tsai Ing-wen told CNN in an interview she will run for re-election as the island's leader in 2020, despite her flagging popularity and growing hostility from Beijing.

"It's natural that any sitting president wants to do more for the country and wants to finish things on his or her agenda," Ms Tsai told CNN's Matt Rivers on Tuesday (Feb 19) in an exclusive interview aboard her presidential plane, saying she wanted to "complete" her vision for Taiwan.

Ms Tsai was the first woman to be elected leader of the self-governed democratic island in 2016, sweeping to power amid promises to overhaul the economy and lessen Taiwan's reliance on mainland China.

But last November, her Democratic Progressive Party (DPP) suffered bruising losses during local elections, prompting her to resign as chairman of the party.

Since then, she has faced calls from senior members of her own party to not seek re-election. But despite the criticism, Ms Tsai told CNN she is "confident" in her ability to win.

"This is something I have prepared for," Ms Tsai was quoted as saying.

Ms Tsai will face a difficult re-election bid. Party chairman Cho Jung-tai said last month that the party's flag-bearer will be decided by popular ballot and the outcome will be known by mid-April.

Besides Ms Tsai, former Premier Lai Ching-te is also a favourite to win the party's nomination.

If she wins the DPP primary, Ms Tsai would come up against the candidate of the Kuomintang (KMT), the main opposition party that traditionally favours closer relations with mainland China.

Opinion polls indicate she is down as much as 30 per cent against potential KMT presidential nominee Eric Chu, a former Vice-Premier whom she defeated in 2016.

China and Taiwan have been ruled separately since the KMT government fled to Taiwan after the civil war defeat in the 1940s.

Beijing has said it will not hesitate to use force if Taipei formally declares independence, or in the case of external intervention - including by the United States, the island's most powerful unofficial ally. 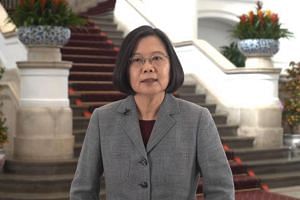 The already terse relationship between the two sides got off to an even rockier start in the new year after Chinese President Xi Jinping gave a landmark speech describing the island's unification with the mainland as "inevitable".

Ms Tsai hit back saying her people would never relinquish their democratic freedoms, an unusually robust response that saw her receive a bump in the polls.

Ms Tsai said in the CNN interview cross-strait relations weren't a key factor in her party's setback at last year's elections. She blamed her party's bruising defeat on what she calls a difficult reform agenda she has pushed since taking office.

Her efforts to promote pension and labour reform and push for equal rights for the island's LGBT community have become divisive issues in Taiwan, fuelling protests across the island.

"You get attacks, you get criticism, the people don't feel the result of the reform so much when you've just started," Ms Tsai told CNN.

Ms Tsai told CNN she felt she had spent too little time talking with voters in her first two years in power.

"I spent too much time in managing the government affairs and I spent a lot of time making foreign visits to our diplomatic allies," she said. "Many people thought I was a bit detached from them."