TAIPEI (REUTERS) - Authorities in Taiwan have ordered markets, businesses and schools to close on Friday (Aug 9) as a super typhoon approaches the island, forcing flight cancellations and landslide warnings shortly after an earthquake of magnitude 6 struck.

Typhoon Lekima, which is packing maximum winds of 234kmh, is expected to hit the island late on Thursday, after gaining in strength to become a super typhoon, weather officials said.

"An earthquake struck when we are making preparations for the typhoon, which is a rare event," premier Su Tseng-chang told a meeting at a national emergency centre, urging officials to stay on alert for its approach.

The strongest storm to hit the island this year is expected to approach off the northeastern coast, after moving across the ocean in a northwesterly direction at 19kmh, Taiwan's weather forecasters said.

Taiwan's weather bureau issued wind and rain warnings for greater Taipei, the northern port city of Keelung and other northern counties. It also put out a warning to seafarers off the south and east coasts.

Thursday's earthquake off the northeast coast prompted warnings of landslides as the weather bureau forecast rainfall of up to 900 mm in Taiwan's northern mountains.

The earthquake cut power to more than 10,000 buildings and a woman was killed by a falling wardrobe.

More than 2,000 people were moved to safety, most of them tourists on islands off the east coast and residents of mountainous areas, while troops fanned out in some areas amid fears of floods. 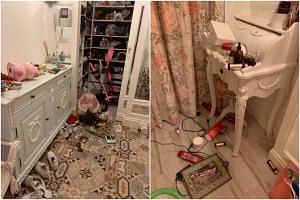 One dead after 5.9-magnitude quake jolts Taiwan; island also bracing itself for rainstorms brought by typhoon

The storm will continue towards China, approaching the eastern commercial hub of Shanghai over the weekend, the weather bureau said.

Typhoons regularly hit Taiwan, China, the Philippines and Japan in the second half of the year, gathering strength from the warm waters of the Pacific Ocean or South China Sea before weakening over land.

Typhoon Morakot devastated the island in 2009, killing nearly 700 people, most of them in landslides.