TAIPEI (AFP) - With a presidential election looming, Taiwan is bracing for a deluge of fake news and disinformation - much of it emanating from China and aimed at making sure Beijing's preferred party wins the day, analysts say.

Torrential rain did little to put off tens of thousands of people rallying in Taipei on Sunday (June 23) against what they have dubbed the "red media".

The term is used to describe both legitimate news outlets and more opaque online sources that flood the democratic island with either pro-China coverage or outright disinformation.

"I don't want to see 'red forces' invading Taiwan to control the media and manipulate what people think, to fool the public," Mr Alan Chang, a 30-year-old businessman attending the rally, told AFP.

Taiwan goes to the polls in January and the contest is set to be dominated by relations with China.

The island has been a self-ruled de facto nation in charge of its own affairs and borders for the last 70 years.

But Beijing maintains that Taiwan is part of its territory and has never given up its threat to retake it, by force if necessary. 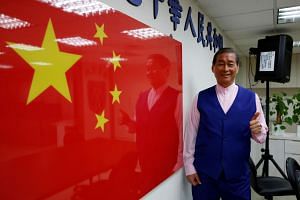 Pro-China groups step up game to win over Taiwan

It has stopped communication with the government of President Tsai Ing-wen, who is seeking a second term, because she refuses to acknowledge the island is part of "one China", while ramping up military drills and poaching Taiwan's dwindling diplomatic allies.

Ms Tsai's main challenger is the Kuomintang, which favours much warmer ties with the Chinese mainland and is the party that Beijing wants to see back in power.

"The stakes for the 2020 elections are high, as they will determine Taiwan's future direction," Mr J. Michael Cole, a Taipei-based expert at the University of Nottingham's Taiwan Studies Programme, told AFP, adding that fake news was already at "alarming levels".

"So (Beijing) will intensify its influence operations - including fake news - to increase the odds that someone other than Tsai is elected," he added.

One particularly egregious example that sparked criticism of the government was a widely shared, but patently false, report that China rescued Taiwanese tourists stranded in a Japanese airport during a typhoon.

Mr Hu Yuan-hui, head of the Fact Checking Centre in Taipei, said the viral nature of disinformation is aided by many Taiwanese people using Chinese social media and messaging services.

"They (fake reports) tend to highlight the contrast between Taiwan and China to try to portray a chaotic Taiwan versus a strong China," he told AFP.

Last November, Ms Tsai's party was hammered in local elections, largely due to a backlash over domestic reforms and a divisive push for gay marriage equality.

But analysts said there was also a surge in fake news items ahead of those polls. 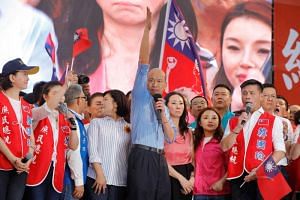 A study by journalism professor Wang Tai-li at National Taiwan University found that 54 per cent of people surveyed were unable to recognise that the report about Chinese evacuating people during the typhoon was fabricated. The report went viral ahead of the November vote.

"Disinformation campaigns were proven effective last year and they will be replicated in larger scale during the upcoming presidential election," Prof Wang predicted.

Reporters Without Borders (RSF) said the false typhoon evacuation story originated on the Chinese mainland and was picked up by Taiwan's social and traditional media, in a "carefully coordinated and extremely effective disinformation campaign".

"Beijing has been targeting Taiwan with disinformation campaigns for decades... However, it is only recently that social networks have enabled these activities to have a viral impact," RSF said.

US officials have also said that Taiwan is "on the frontlines" of China's disinformation campaigns.

"There is no question, at least in our minds, that China will try to meddle, they've done it in every previous election," Mr Randall Schriver, US assistant defence secretary for Asian and Pacific security affairs, said last week.