HONG KONG (NYTIMES) - Tension between China and Sweden over the treatment of a group of tourists in Stockholm has escalated after a satirical skit depicted Chinese travellers as people who eat dogs and need to be told not to defecate in public.

The incident has led to repeated complaints from Chinese diplomats, and calls on Chinese social media for boycotts of Swedish products and travel to the country.

The tensions began earlier this month when a Chinese man and his parents arrived at a hostel in Stockholm after midnight, hours before they could check in for a reservation beginning the next afternoon. The hostel said they could not stay overnight in the lobby and called the police when they refused to leave.

Video of police forcibly removing the family, who were protesting their treatment, was posted online. At one point the son, surnamed Zeng, shouted: "This is killing!"

The incident has been given extensive coverage by Chinese media outlets. The ire from the Chinese side increased after the skit was aired last week by the Swedish national broadcaster SVT.

The satirical skit was billed as a guide for Chinese tourists to avoid causing problems while abroad. It said that pet dogs should not be seen as potential meals and warned against defecating outside historical monuments. The show uploaded a portion of the skit on Youku, a Chinese online video service.

Mr Geng Shuang, a spokesman for China's Ministry of Foreign Affairs, called the programme "a gross insult to and vicious attack on China and the Chinese people" in a statement on Monday (Sept 24). He said the host's comments were "full of prejudices, biases and provocations against China and some other ethnic groups".

Mr Thomas Hall, the programme manager for SVT, said in a statement on Monday that it had been a mistake to upload a portion of the skit onto Youku. He said that the intention of the skit was to mock racism and highlight how "sinophobia" was not considered as much of a concern as other forms of discrimination in Sweden.

SVT's programme director Jan Helin said the network would not apologise for the satire, the network's news division reported.

The Chinese Embassy in Stockholm on Tuesday called for the programme to engage in "profound reflection and immediately issue a sincere apology".

The Swedish Foreign Ministry said on Wednesday: "We have no comment. Freedom of expression applies."

But on Wednesday evening, Mr Hall apologised on his blog "to those individuals who were offended by our programme".

He wrote: "Our intention with last week's much-discussed programme was anti-racist. It was poking at a blind spot in Sweden where racist expressions about Chinese are often for some reason allowed to go unnoticed."

The show, he added, had been insensitive to how the skit could be perceived.

The tension over the tourist incident and the skit follows a visit to Sweden this month by the Dalai Lama, over the objections of China. 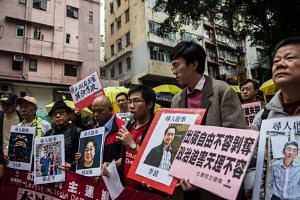 It also came amid long-running concerns about the fate of a Chinese-born Swedish publisher who was imprisoned in China. The publisher, Gui Minhai, had published books from Hong Kong filled with speculative gossip about the Chinese leadership.

He was secretly taken from Thailand to China in 2015 and was later shown on Chinese television admitting to violating publishing rules. Such televised confessions by subjects who have been incommunicado with no legal protections are often used by Chinese authorities to respond to outside criticism over politically sensitive cases.

Chinese authorities said he had been released last year, but his whereabouts were unclear.

Then in January he was snatched from a Chinese train while travelling with Swedish diplomats. Sweden's Foreign Minister Margot Wallstrom called it a "brutal intervention" that contravened "basic international rules on consular support".

The diplomatic strains over the tourist incident have reverberated on Chinese social media. While some people said the family travelling in Sweden acted inappropriately, the strongest sentiment seemed to be anger at the programme's depiction of Chinese tourists.

It is unclear whether calls to punish Sweden economically will have any lasting effect. Chinese nationals are a small but rapidly growing part of tourism to Sweden.

Ikea, the Swedish furniture giant, has eight outlets in mainland China, and they are often packed with shoppers.

Previous boycott efforts have had mixed results. While Norway's salmon exports to China plunged after the Nobel Peace Prize was given to Chinese dissident Liu Xiaobo in 2010, bilateral trade hit a peak in 2015. The two countries normalised relations in 2016.

The controversial television skit is likely to fuel lingering resentment in China over the treatment of the family of tourists in Stockholm.

The video of the tourists being removed from the hotel did not show the police using violence against the family. Some aspects of Chinese state media reports on the incident were contested by Swedish journalists. The family was not taken to a cemetery, as the Communist Party-owned Global Times reported, but to a metro station called Woodland Cemetery.

Chinese diplomats, nevertheless, complained about the family's treatment. The Chinese Embassy in Sweden said they had been "brutally abused by the Swedish police".

The Swedish Prosecution Authority said the Public Prosecution Office determined that the police had not committed a criminal offence and would not open an investigation.