STOCKHOLM (NYTIMES, REUTERS) - China has seized Hong Kong-based bookseller Gui Minhai for a second time after releasing him from custody in October, the New York Times reported on Monday (Jan 22).

Gui, who has Swedish citizenship, was taken away on Saturday (Jan 20) by plainclothes police officers as he travelled by train to Beijing in the company of two Swedish diplomats, The New York Times said.

He became a symbol of the Chinese government’s determination to smother criticism from abroad when he was one of five Hong Kong booksellers who disappeared in 2015, and then resurfaced in China in police custody.

Gui, who vanished from a vacation home in Thailand, was accused by Chinese state news media outlets of publishing books that slurred Communist Party leaders. Months after his disappearance, he appeared on state television confessing culpability for killing a female student in the Chinese city of Ningbo while driving drunk in 2004.

Gui was formally freed from detention last October (2017). But he has been kept in China and forced to report regularly to police, his daughter, Angela Gui, said by telephone from Britain, where she is a graduate student.

She said her father was travelling with two diplomats from the Swedish Consulate in Shanghai, and as the train neared Beijing, plainclothes police officers boarded at a station and led him away.

“This group of about 10 men in plain clothes just came in and grabbed him from the train and took him away,” Angela Gui said. “I presume it must have been quite a scene.” 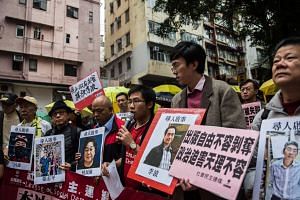 Anger over second 'snatching' of bookseller in China

The Chinese Ministry of Foreign Affairs said that it “had no understanding of the situation you referred to,” and suggested asking another ministry. The Ministry of Public Security did not answer questions faxed on Monday.

Angela Gui said she was baffled by what secrets her father could have known, and did not see how it could be unlawful for her father to meet a Swedish diplomat.

“Obviously, they’ve acknowledged that he’s a Swedish citizen,” she said of the Chinese police. “How that is a crime is difficult to comprehend.”

Sweden’s foreign ministry said Foreign Minister Margot Wallstrom had summoned China’s ambassador over the issue. The ministry would not comment on what had happened on Saturday, but an official said Sweden was aware and would be able to provide more information, possibly on Tuesday.

“The Swedish Government is fully aware of what happened on Jan 20. Firm actions have been taken at a high political level and we have been in contact with Chinese officials who have promised us immediate information about his condition,” the official, Patric Nilsson, said.