HONG KONG (AFP) - Videos falsely claiming to show a Chinese military crackdown against pro-democracy protesters in Hong Kong have flooded social media over the past week, according to an AFP investigation that has debunked multiple posts.

The videos, which have been viewed millions of times, have compounded fears about China's potential intervention into a two-month crisis that has seen increasingly violent confrontations between protesters and Hong Kong's police.

Some of the false posts appeared shortly after a Chinese defence ministry spokesman last week highlighted during a press conference a law that allows troops to be deployed across Hong Kong at the request of the city's government.

The People's Liberation Army (PLA) has maintained a garrison in Hong Kong since the former British colony was returned to China in 1997.

A Hong Kong government fact sheet on the law, which includes an estimate of 8,000-10,000 PLA troops in Hong Kong, is available online.

But those troops generally keep a low profile and are rarely seen in uniform in public.

And while various senior Chinese government officials and Hong Kong's leaders have voiced outrage at the protesters, city authorities have also repeatedly denied that PLA troops have been deployed.

AFP has, however, detected posts on Facebook, Twitter, Weibo and other social media platforms with millions of views or interactions that claim to show masses of Chinese soldiers on foot and in tanks across Hong Kong.

"For your own safety all the HK residents are asvised (sic) not to go to public places and sea sides for next 48 hrs and avoid gatherings as PRC army is taking control of HK," said one purported Hong Kong government announcement posted on Facebook five hours after the Chinese defence ministry's comments on July 24. 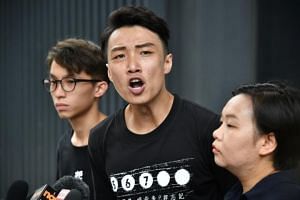 The Hong Kong government has issued no such announcement. And the video used in the post to purportedly show the crackdown was actually of Chinese military vehicles driving through the Hong Kong city of Kowloon in 2018.

In another piece of misinformation that emerged within hours of the Chinese defence ministry spokesman's comments, a tweet shared footage of PLA troops walking at a train station alongside a claim they were "entering Hong Kong".

By Tuesday afternoon, the video had been viewed more than 1.4 millions times.

AFP found the video was actually filmed in the Chinese mainland.

Other videos posted on July 24 had the same claims of Chinese troops "entering Hong Kong" while using video from other situations to mislead.