HONG KONG (BLOOMBERG) - Hong Kong's airport used a newspaper advertisement to appeal to protesters, asking them not to target the transport hub ahead of another weekend of anti-China demonstrations in the city.

In the ad, the authority urged demonstrators "not to disrupt the journey of tens of thousands of travellers who use our airport every day".

Last weekend saw some of the most violent confrontations since the unrest broke out in Hong Kong three months ago.

Protesters, who oppose China's tightening grip on the former British colony, vandalised turnstiles at train stations to the airport and the high-speed rail link to the terminal was suspended.

Hundreds of flights at what is Asia's busiest hub for international traffic were delayed or cancelled, leaving queues of people stuck at the terminal sitting on suitcases, while others walked down the highway pushing luggage.

It is not the first advertisement by Hong Kong authorities to combat the unrest.

The government took out a full-page ad in Thursday's edition of the Australian Financial Review to reassure investors the city is stable and the economy is strong.

Tycoons and businesses in the city have also appealed for calm in the city with newspaper ads. 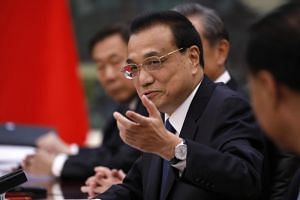 There have been repeated calls online for protesters to block traffic to the airport again this weekend, and passengers should allow extra time to catch their flights, the authority said in its ad on Friday.

The airport obtained a court injunction last month against people holding protests inside the terminal, and a later one preventing them from blocking the roads.

The demonstrations are set to continue, even after Hong Kong's Chief Executive Carrie Lam formally withdrew the contentious extradition Bill that sparked the pushback against Beijing in June.

Pro-democracy activists and lawmakers say her concession is too little too late, with protesters also demanding an independent inquiry into police behaviour and the right to nominate and elect Hong Kong's leader.

Turnstiles and ticket machines at a subway station were vandalised on Wednesday night, spurring the operator, MTR Corporation, to "strongly condemn" attacks on staff and destruction of their facilities.

The railway network has been a key target of the demonstrators, with several lines closed last weekend amid heightened tensions.

Footage showed police swinging batons at protesters as they clung to one another in subway cars.