Japan last week imposed curbs on highly specialised products needed to make semiconductors and computer displays, and could also remove its neighbour from a list of trusted buyers.

"Despite our diplomatic efforts, we cannot rule out the possibility of this situation becoming prolonged," Mr Moon said.

"Our government is forming a response system demanding Japan to withdraw its unfair export limit measures with a sense of urgency," Mr Moon said in Seoul, calling the current situation an "unprecedented emergency".

Japan has said it made the move to ensure proper security and questioned its trust of South Korea after courts there last year ruled that Japanese companies needed to pay compensation to Koreans conscripted to work at mines and factories during Japan's 1910-45 colonial rule over the Korean peninsula.

Tokyo said all claims were settled by a 1965 treaty and that it didn't see the court decisions as valid.

The dispute has moved into the economic arena what the two see as proper contrition for Japan's colonial rule over the Korean peninsula. Past fights have mostly kept industries on both sides out of the fray but the worry now is that tensions between the major trading partners and US allies could spiral out of control. 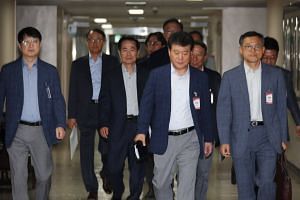 Mr Moon on Wednesday proposed an "active support" from the government's end for companies to diversify importers and expand local production, adding that the export curbs would be reflected in an upcoming extra budget bill proposal within the National Assembly.

The stakes are high for Mr Moon, who has seen the economy stumble under his watch while the jobless rate has hit levels it hasn’t seen in about a decade.

While the stricter checks that took effect Thursday don't amount to a ban, exporters would be required to obtain a separate licence each time they want to sell the materials to South Korea, causing delays.

Japan is also considering removing South Korea from a list of trusted export markets, a move that could affect a broader swath of products.

South Korea is taking its case over the expert measures to the World Trade Organisation. Its courts have ruled since late 2018 said the victims of forced labour weren't compensated for their emotional pain and suffering.

The new restrictions could hurt the profits of South Korean firms that rely on Japanese suppliers, such as Samsung Electronics and LG Display Co.

Japan has 90 per cent of the market for chips used in smartphone displays, as well as the etching gas used to make chips.

Unless the dispute gets settled, South Korean firms will have to find alternative supplies from Taiwan and China, while Japanese manufacturers would need to divert their production.

Mr Mark Mobius, an emerging-market guru, warned the simmering tensions between Seoul and Tokyo won’t be quickly resolved and investors should be prepared.

"We can’t see an easy resolution unless the US attempts to negotiate a resolution," said Mr Mobius in an email interview.