After a blatant snub at last week's Group of 20 summit with no leaders' meeting and just a forced eight-second handshake, Japan has slapped restrictions on chemical exports to South Korea on national security grounds as diplomatic ties lie in permafrost.

The move, which could severely damage South Korea's memory chip and smartphone production, will take effect from tomorrow and comes amid a row over wartime forced labour.

Experts warned that the mutually destructive spat could escalate into a trade war and cause a ripple effect to global supply chains and the electronics market.

South Korean firms Samsung Electronics and SK Hynix have a combined 70 per cent market share of the world's memory chip business, and are ranked second and fourth in semiconductor sales in the first quarter of this year.

Their memory chips go into smartphones made by Apple and Huawei, computers made by HP and Lenovo, and television sets made by Sony. But the raw materials for these chips come mainly from Japan, which controls up to 90 per cent of the world's supply of resists used in semiconductors, and etching gas used in chips.

Under a new screening process, Japanese firms will need approval to export to South Korea the resists and etching gas, as well as fluorinated polyimides found in LED displays.

Each review may take up to three months, and the process is expected to slow down exports. As it is, South Korean media have warned the country's stockpiles may run out within three months - and the move will force South Korean firms to look elsewhere for the materials. 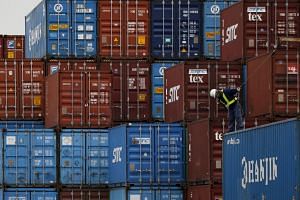 Japan will also remove South Korea from a so-called "White List" of countries with which there are minimal trade restrictions.

The Japanese government cited the "significantly undermined" trust between the two nations for the new measure.

Chief Cabinet Secretary Yoshihide Suga said yesterday it was a matter of national security, after South Korea failed to "show a satisfactory solution" over the wartime forced labour issue.

Japan insists the issue was settled in a 1965 treaty that was signed to normalise bilateral ties. But South Korean courts have begun ordering the seizure of the local assets of Japanese firms in the country.

Seoul snubbed Tokyo's bid last month to bring the dispute to arbitration, and on Monday filed a complaint with Japan's envoy in Seoul.

Mr Sung said Seoul may take the trade restrictions to the World Trade Organisation, saying that the measures go against WTO rules and global efforts to establish free and fair trade.

But Tokyo retorted that its move was in line with the WTO rules, adding that the "difficulties" of doing business "based on a relationship of mutual trust under these circumstances" meant there was a need to monitor the exports of any material that may have military uses.

Observers have long cautioned that Japan has the economic means to retaliate if South Korea kept politicising what it says are unresolved historical issues, such as wartime forced labour and comfort women.

Tit-for-tat measures that spill over from a diplomatic row will end up hurting both countries, said Dr Lee Myon-woo of the Sejong Institute think-tank. 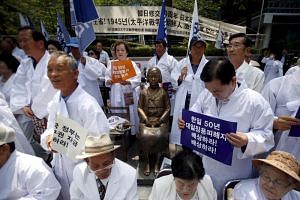 "The big obstacle now is both countries have misunderstandings with each other, and it will not be easy to resolve given the history between them," he added.

Professor Heo Yoon of Sogang University said South Korea's decision to complain to the WTO is a step in the right direction, but it may not be effective as arbitration could take a long time.

While other chipmakers such as America's Intel and Micron may benefit from South Korea's loss, Prof Heo said a supply shortage could send prices soaring and force companies to resort to trade deflection - trading via a third party to avoid tariffs.

"Japan's economy will be damaged too, as many Japanese firms import Korean semiconductors and displays. It's a self-inflicting move, like shooting your own foot."

Dr Jeffrey Kingston, director of Asian studies at Temple University Japan, told The Straits Times that it will be difficult for a positive outcome "given the nationalistic posturing on both sides".

He added: "I think (Japanese Prime Minister Shinzo) Abe has looked at how (US President Donald) Trump has used the cudgel of trade to influence a nation's behaviour."