TOKYO (REUTERS) - A group of South Korean lawmakers landed on an islet disputed with Japan in the East China Sea on Monday (Nov 26), prompting a protest from Tokyo and straining ties at a time when stalled talks over North Korea's nuclear programme call for close coordination.

Tokyo and Seoul have long been at loggerheads over the sovereignty of a group of islets called Takeshima in Japanese and Dokdo in Korean, which lie about halfway between the East Asian neighbours in the Sea of Japan, which Seoul refers to as the East Sea.

"This landing on Takeshima by a group of South Korean lawmakers was carried out despite Japan's advance protests and requests to call it off," Japanese Chief Cabinet Secretary Yoshihide Suga told a regular news conference.

"In light of our country's stance on sovereignty over Takeshima, this is by no means acceptable."

It was the lawmakers' second visit to the islands since August 2016, media said.

The two countries share a bitter history that includes Japan's 1910-45 colonisation of the Korean peninsula and the issue of "comfort women", a Japanese euphemism for South Korean women forced to work in Japanese military brothels in World War II.

South Korea last week shut down a Japan-funded foundation created under a 2015 deal between the Asian neighbours to settle compensation for the women. 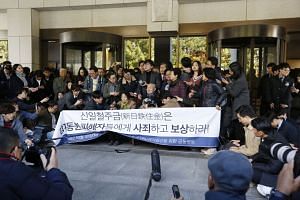 US can do more to mend fraying Seoul-Tokyo ties

South Korea vowed to pursue a more "victim-oriented" approach, but the move prompted Japanese Prime Minister Shinzo Abe to warn South Korea that it was risking damaging ties by disbanding the fund.

North Korean leader Kim Jong Un and US President Donald Trump pledged to work towards denuclearisation at their landmark June summit in Singapore, but the agreement was short on specifics and negotiations have made little headway since.