SEOUL (BLOOMBERG) - South Korea has formally dissolved a Japanese-backed foundation meant to resolve a dispute over women who were trafficked to Japanese Imperial Army brothels across Asia before and during World War II, the Asahi newspaper reported, as hostility grew between the US allies.

The move came after Japan stepped up checks on Thursday (July 4) on exports of three materials vital to South Korea's all-important tech industry, linking its actions to a separate historical dispute over compensation for forced Korean labour. Japan was considering removing its neighbour from a list of trusted export destinations.

"Japan can absolutely not accept this," Deputy Chief Cabinet Secretary Yasutoshi Nishimura told reporters in Tokyo about the report of the fund's dissolution.

He said Japan made its objections clear to South Korea and was told by Seoul that a registration for dissolution had been filed but procedures weren't complete.

The exact status of the fund was uncertain as well as what would happen to the remaining money.

Citing unidentified sources close to the foundation, the Asahi said it had been registered for liquidation. South Korea's Foreign Ministry said the foundation has been under a liquidation process.

Simmering animosity over Japan's 1910-1945 colonisation of the Korean peninsula has spiralled since last year, with Tokyo infuriated by South Korean court decisions holding its companies responsible for Koreans sent to work in Japanese mines and factories during that period. 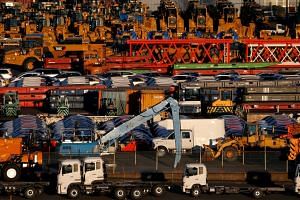 The stand-off has the potential to affect the two countries' ability to work together to counter regional threats from China and North Korea.

Japan and South Korea reached a "final and irreversible" agreement in 2015 on one of the most painful legacies of the colonial period, under which Tokyo provided one billion yen (S$12.5 million) to set up a fund to compensate the former so-called "comfort women" and Prime Minister Shinzo Abe conveyed a fresh apology. The two governments agreed to avoid criticism of each other over the issue on the international stage.

But many South Koreans opposed the deal, which was made without consulting the victims, some of whom refused the money in protest. Under President Moon Jae-in, who took office in 2017, South Korea said it would shut down the fund.

Mr Moon and Mr Abe failed to hold a customary one-on-one meeting during the Group of 20 summit in Osaka last month, and Mr Abe said Thursday that the burden was on South Korea to resolve the forced labour issue.

Japan holds that all claims were settled under a 1965 treaty normalising ties between the two countries, under which it provided US$300 million - US$2.4 billion (S$3.2 billion) in today's money - and extended US$200 million in loans. South Korean courts have said the victims were not compensated for their emotional pain and suffering.