SEOUL (AFP) - At first glance the two Koreas' first ladies, who are to attend a banquet Friday (April 27) following a historic summit between their husbands, would appear to have little in common.

Ri, the wife of the North's leader Kim Jong Un, has gained a growing political profile, accompanying Kim to key events at home and abroad including last month's summit with Chinese President Xi Jinping - whose wife Peng Liyuan is also a former singer.

Believed to be in her late 20s and having three children with Kim, Ri was already a public figure in her own right as a singer for the Unhasu band - an elite troupe whose members are handpicked by the state based on their talent, looks and loyalty to the regime.

The couple tied the knot in 2009, but Ri was only publicly identified as Kim's wife in 2012 after the young, inexperienced leader inherited power from his father the previous year.

Ri quickly became one of the most high-profile women in the isolated country, joining her husband on numerous "field guidance trips" and for meetings with foreign dignitaries, often dressing in luxury brands and once sporting a Christian Dior handbag.

Her public presence was a departure from precedent in the North, where the wives of the previous two leaders - Kim's father and grandfather - rarely made public appearances, with details about their lives mostly kept secret. 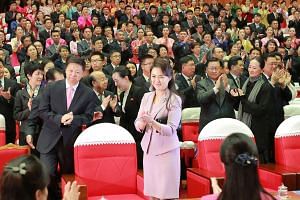 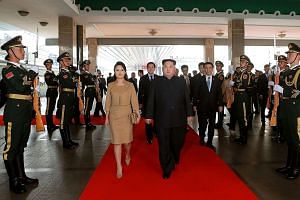 Ri was accorded the description of "respected First Lady" in the North's state media earlier this month - the first time the title had been used in the deeply patriarchal country for more than 40 years.

It came as she made her first solo public appearance, with analysts saying the moves were an effort to paint the North as a "normal state" ahead of Kim's summits with Moon and US President Donald Trump.

Ri will dine with her Southern counterpart Kim Jung Sook, the wife of South Korean President Moon Jae In.

In the Korean writing system, Kim's name is identical to that of Kim Jong Un's grandmother Kim Jong Suk.

The 63-year-old is also a professionally trained vocalist who was once a member of the Seoul city choir before becoming a housewife shortly after marriage and having two children.

As Moon gained political prominence, Kim endeared herself to the public with her outgoing and cheerful personality - in contrast to her husband, who is often described as too quiet and bland.

She has showed off her singing skills at public events and was seen performing Psy's horse-riding Gangnam Style dance on a visit to the Philippines last year - a break from most previous first ladies who remained quiet and coy next to their husbands.

The couple met at a university in Seoul where Kim was studying classical singing and law student Moon was a pro-democracy activist opposing the then military dictatorship.

Moon says they fell in love when she took care of him after he was left unconscious by a police tear gas canister fired during a campus pro-democracy rally, and she supported him while he served a prison term for his activism.

It was Kim who proposed to Moon - a rarity in the conservative South - in defiance of opposition from her parents, who were unimpressed by his humble background as the son of poor North Korean refugees.