SEOUL (THE KOREA HERALD/ASIA NEWS NETWORK) - Kim Yo Jong, the younger sister of North Korean leader Kim Jong Un, once again made public appearances in dealing with the South, raising speculations about her role in the regime.

On Monday (Mar 5), Kim Yo Jong, who serves as the first vice-director of the North's Workers' Party Central Committee, accompanied her brother to a meeting with Seoul's special envoys, and later a welcome dinner in Pyongyang.

The special envoys, led by National Security Office chief Chung Eui Yong, arrived in Pyongyang on Monday for a two-day visit. In an unusual move, Kim Jong Un received the envoys on the first day of their visit and hosted a welcome dinner.

At the meeting held ahead of the dinner, the only other North Korean present was Kim Yong Chol, further fuelling speculations of Kim Yo Jong's rising status.

Kim Yong Chol is vice-chairman of the Central Committee of the Workers' Party and the chief of Pyongyang's organ for dealing with the South.

Unlike the two Kims of North Korea's ruling family, Kim Yong Chol rose to power through long years of service.

He is accused of being the mastermind behind the North's operations against the South, including the 2010 torpedo attack on South Korean naval warship Cheonan, which killed 46 seamen. 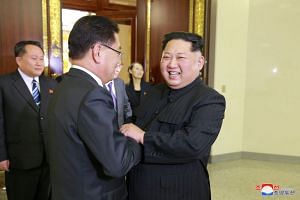 According to experts, Kim Yo Jong may have played a central role in recent developments in inter-Korean relations.

"There is a possibility that Kim Yo Jong had a significant part in designing the recent changes in relations," Hong Min, director of the North Korean studies division at the Korea Institute for National Unification, was quoted as saying by a local news agency.

Hong was also quoted as saying that Kim Yo Jong appears to be playing the role of chief-of-staff to her brother.

Regardless of her status within the North's state organs, Kim Yo Jong has played a central role in recent inter-Korean developments.

The younger Kim came to the South on Feb 9 as her brother's special envoy tasked with delivering his letter to South Korean President Moon Jae In, and to extend his offer of an inter-Korean summit.