Chinese President Xi Jinping and Singapore’s Prime Minister Lee Hsien Loong on Wednesday (Sept 20) discussed new areas of bilateral cooperation even as they reaffirmed the deep and strong friendship built over the years  by successive generations of leaders.

The new areas of bilateral cooperation include those in financial, judicial and legal matters, as well as in defence, said the Prime Minister’s Office (PMO) in a statement.

PM Lee’s meeting with Mr  Xi took place at Beijing’s Great Hall of the People on the second day of his three-day official visit to China. The meeting was the top item on CCTV news bulletin on Wednesday evening.

In his opening remarks at the start of the meeting, Mr Xi said there are many opportunities to build ties with Singapore in what he described as a “new historical chapter “.

“In sum, I believe that in this new historical chapter there are many opportunities to build our ties in substantial and fruitful ways,” Mr Xi said. 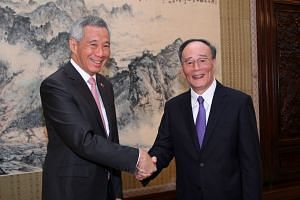 Mr Lee said he was grateful to receive an invitation to visit China at this busy time, when China is preparing for its 19th party congress. The twice-a-decade meeting where the Chinese Communist Party reshuffles its top leadership will convene on Oct 18.

Both leaders agreed that both countries enjoy strategic congruence and share common interests in many areas, which has contributed to the close and multi-faceted cooperation over the years, including the successful collaboration in the three Government-to-Government projects, namely the Suzhou Industrial Park, the Tianjin Eco-City, and the Chongqing Connectivity Initiative.

Both leaders also noted the important role played by the major bilateral mechanisms namely the Joint Council for Bilateral Cooperation(JCBC), Singapore-China Leadership Forum, and the Singapore-China Social Governance Forum, all chaired at the DPM and Vice-Premier level, and the Judicial and Legal Roundtable co-chaired by the two chief justices.

They agreed to further strengthen these mechanisms to bring relations to the next level.

President Xi also expressed appreciation for Singapore's early support for the Belt and Road Initiative and the Asian Infrastructure Investment Bank (AIIB). Both leaders highlighted the potential of the Chongqing Connectivity Initiative and the Southern Transport Corridor to play an important role in supporting the Belt and Road Initiative, as well as China's domestic developmental priorities, particularly in western China.

PM Lee and President Xi also reaffirmed the three platforms under the Belt and Road Initiative, namely infrastructural connectivity, financial connectivity and support, and third-country collaboration, including joint training for officials from Belt and Road countries.

On regional developments, PM Lee and President Xi expressed their deep concern over the heightening tensions on the Korean Peninsula.

Mr Zhang, welcoming Mr Lee on behalf of the National People's Congress, said he was pleased to see Mr Lee again 11 years after their last meeting, when he was still the party secretary of Guangdong province.

He added that Mr Lee's meeting with China's top leaders during this visit, such as with Premier Li Keqiang on Tuesday and with President Xi and Mr Wang on Wednesday shows that China really attaches great importance to Mr Lee's visit, and to developing friendly relations with Singapore.

Mr Lee said that a lot has happened in Singapore-China ties in the 11 years since they last met. "Our relationship has progressed, our cooperation had broadened and deepened, and there are many more things which we are doing together now," said Mr Lee.