"We are very honoured to be here just before the 19th Party Congress," Mr Lee said in his opening remarks, referring to a twice-a-decade meeting where the Chinese Communist Party reshuffles its top leadership. The party congress will start on Oct 18.

"We know it’s a very busy time for you and for all your colleagues, and we’re very appreciative that you are spending time to cultivate this bilateral relationship and take our cooperation another step forward," Mr Lee said.

Mr Wang said that since China embarked on a path of reform and opening up in the 1980s, the Chinese leadership has been following very closely what Singapore has been doing.

Mr Wang, who was co-chairman of the Joint Council for Bilateral Cooperation (JCBC) from 2008 to 2012, said Singapore - and its officials - is among the countries with which he has had the most contact. The JCBC is the top body steering bilateral ties between the two countries. The Council is currently co-chaired by Deputy Prime Minister Teo Chee Hean and Chinese Vice Premier Zhang Gaoli, who is also a member of the PSC.

"He (was) such a visionary figure full of political wisdom," said Mr Wang. "I gained a lot every time I talked with him ... I'm really greatly saddened by his passing. He was indeed a great man."

After the meeting on Wednesday morning with Mr Wang, Mr Lee and his delegation visited SenseTime, a Chinese technology company started in 2014.

Mr Lee was shown the Chinese firm's products, such as facial recognition for verification purposes - currently used by some of its clients in place of office key cards - and real-time traffic monitoring software that turns ordinary traffic cameras into "smart" cameras able to analyse the kind of vehicle and human traffic flowing through.

SenseTime also showed Defence Minister Ng Eng Hen the military applications of its technologies, which use AI to analyse satellite imagery for military assets, and topographic and terrain data. The technologies also have disaster-relief applications, such as the mapping of condition of roads, and detecting cracks and other faults.

SenseTime is one of the rising stars in China's start-up scene and an important player in the AI field on the world stage.

The company has raised at least US$410 million (S$550 million) to date in venture capital, and is valued at US$1.5 billion, putting it at No. 56 on China Money Network’s China Unicorn Ranking of private technology companies valued at US$1 billion or more in China.

Mr Zhang said he was pleased to see Mr Lee again 11 years after their last meeting, when he was still the party secretary for Guangdong province.

He added that Mr Lee's meeting with China's top leaders during this visit, such as with Premier Li Keqiang on Tuesday and with Mr Wang Qishan on Wednesday shows that China really attaches great importance to Mr Lee's visit, and to developing friendly relations with Singapore.

Thanking him, Mr Lee said that a lot has happened in Singapore-China ties in the 11 years since they last met.

"Our relationship has progressed, our cooperation had broadened and deepened, and there are many more things which we are doing together now," said Mr Lee.

Mr Lee said he looked forward to building on this with China's new leadership team following the 19th party congress to be held next month.

Mr Lee arrived in Beijing on Tuesday (Sept 19) for a three-day official visit. He met Premier Li Keqiang at the Great Hall of the People on Tuesday.

The relationship is built on a foundation of mutual respect and equal footing, Mr Li said, and this has benefited the people of both countries.

Mr Lee thanked the Chinese Premier for extending a warm welcome, and said he was grateful for Mr Li's attention to bilateral ties.

Both leaders also touched on Asean-China ties, and affirmed the progress made during Singapore's ongoing tenure as country coordinator for Asean-China dialogue relations, the Prime Minister's Office (PMO) said after the meeting on Tuesday.

Mr Lee said Singapore will promote stronger Asean-China cooperation during its chairmanship of the regional grouping next year.

On Wednesday night, Mr Lee will travel to Xiamen in Fujian province, where he will meet provincial party chief You Quan.

He will also visit ST Aerospace Technologies (Xiamen) and a polyclinic set up jointly by Singapore and China in 2011. 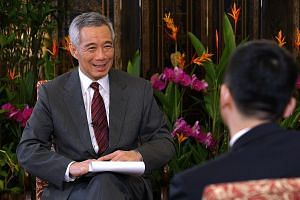 How Singapore-China ties have kept up with the times

At a press conference for international media, Mr Bai Tian, vice-director of the Chinese Foreign Ministry's Asian department, said China and Singapore pledged to strengthen cooperation at all levels. This included the three ongoing government-to-government projects in Suzhou, Tianjin and Chongqing, as well as official platforms such as the Joint Council for Bilateral Cooperation, which is co-chaired by Deputy Prime Minister Teo Chee Hean and Chinese Vice-Premier Zhang Gaoli.