Both sides have gained from the relationship built on mutual respect, equal footing, he says

The relationship is built on a foundation of mutual respect and equal footing, Mr Li said, and this has benefited the people of both countries.

Mr Lee thanked the Premier for extending a warm welcome, and said he was grateful for Mr Li's attention to bilateral ties.

The two leaders held a 45-minute meeting at Beijing's Great Hall of the People, which was preceded by an official welcome ceremony. Mr Li also hosted a dinner banquet in Mr Lee's honour.

At their meeting, the leaders reaffirmed the warm and longstanding friendship between Singapore and China. They welcomed the frequent high-level interactions between leaders of the two countries in recent months, the Prime Minister's Office (PMO) said.

They also reviewed the extensive and substantive bilateral cooperation between Singapore and China, especially in economic and financial collaboration, the PMO added.

They welcomed the good progress made in negotiations for the upgrade of the China-Singapore Free Trade Agreement, and discussed the potential for deepening bilateral ties through new areas of collaboration, such as in financial and judicial and legal cooperation.

Mr Li, who last met Mr Lee at the Asean Summit in Laos a year ago, welcomed Singapore's support for China's Belt and Road Initiative.

The two leaders noted the potential of the Chongqing Connectivity Initiative, their countries' third government-to-government project, to link the land- and sea-based trade routes.

On Asean-China ties, Mr Lee told Mr Li that Singapore will promote stronger cooperation between the two sides when it takes over as Asean chair next year.

At a press conference for international media, Mr Bai Tian, vice-director of the Chinese Foreign Ministry's Asian department, said both sides pledged to strengthen cooperation at all levels. This included the three ongoing government-to-government projects in Suzhou, Tianjin and Chongqing, as well as official platforms such as the Joint Council for Bilateral Cooperation, which is co-chaired by Deputy Prime Minister Teo Chee Hean and Chinese Vice-Premier Zhang Gaoli.

The Chinese Communist Party will convene its 19th Party Congress starting on Oct 18, a twice- a-decade reshuffle of the top echelons of the Chinese leadership.

"For Singapore to visit on the eve of the meeting shows that both sides have maintained high-level visits at a good momentum, and is a very important political signal," Mr Bai said. "I am very confident in China-Singapore relations and, with hard work from both sides, the relationship will grow from strength to strength." 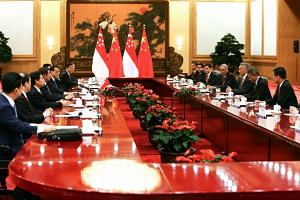 He will travel to Xiamen in Fujian province, where he will meet provincial party chief You Quan. He will visit ST Aerospace Technologies (Xiamen) Company and a polyclinic set up jointly by Singapore and China in 2011.