BEIJING (CHINA DAILY/ASIA NEWS NETWORK) - More than 1,300 fugitives, including 307 corrupt government officials, were repatriated to face trial in China last year as the National Supervisory Commission made progress in promoting law enforcement cooperation with other countries.

The commission said 1,335 fugitives were brought back to China in 2018, with over 3.5 billion yuan (S$702 million) in ill-gotten gains recovered. The number of fugitives and amount of funds recovered rose by 3 per cent and 261 per cent, respectively, year-on-year.

Mr La Yifan, director of the Chinese Communist Party's (CCP) Central Commission for Discipline Inspection's (CCDI) International Cooperation Bureau, said: "The successful extradition and repatriation of the fugitives demonstrates the country's resolute determination to fight cross-border corruption. In particular, since the country started to reform the anti-graft system in March, the newly established supervisory commission has turned its institutional advantage into effective governance."

Since late 2012, when the current leadership took office, the anti-graft campaign has been a top priority nationwide. In October 2017, President Xi Jinping said during the 19th CCP National Congress: "No matter where fugitives escape to, we will make every effort to capture them and bring them to justice."

At international forums, Mr Xi has stated repeatedly that China will strengthen law enforcement cooperation with other nations to combat cross-border corruption and dissuade other countries from offering safe havens to fugitives.

In 2015, China launched the Skynet campaign to apprehend fugitives and confiscate their illicitly gained assets.

The commission said 5,201 economic fugitives were returned to face trial from 120 countries and regions from June 2014 to the end of 2018, including 1,063 corrupt officials. At the same time, 13.16 billion yuan in illicitly gained assets was recovered. 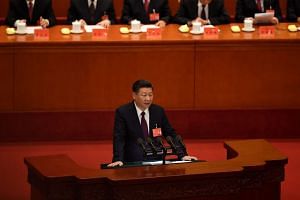 The CCDI added that local branches were set up nationwide and the Supervision Law took effect in March. Under this law, the commission coordinates with other authorities to strengthen judicial cooperation in the fight against corruption, the investigation of cases and the extradition of fugitives.

Dr Jiang Laiyong, a researcher at the Chinese Academy of Social Sciences' China Anti-Corruption Research Centre, said: "Since the commission set up branches, the country has integrated anti-corruption resources, and judicial officials will send professional investigation teams to improve the capability to seize fugitives and recover their ill-gotten gains."

It clarified the conditions and procedures for repatriating criminals as well as specifying the duties of each judicial department. It also made clear the procedures for investigation requests and the collection of evidence generated by China or other countries.

In 2015, Interpol issued Red Notices for the 100 most-wanted corrupt Chinese fugitives. To date, 56 have returned to the country from more than 17 nations and regions to stand trial.

An Interpol Red Notice is a request to locate and provisionally arrest an individual pending extradition.