HONG KONG - Protesters clashed with police at the Hong Kong International Airport late Tuesday (Aug 13) night after all departing flights were suspended when anti-government protesters returned to occupy the arrival and departure halls.

Police said they have arrested five people for unlawful assembly, assaulting police officers and possessing weapons, according to AP.

Officials said in a statement that some protesters detained, harassed and assaulted a traveller and a journalist, and obstructed ambulance workers from taking the two men to the hospital. They said other protesters attacked a police officer and snatched a baton from him.

This is the first time police have shown up at the airport during multiple days of sit-in protests, which have been largely peaceful.

A report in the South China Morning Post later said that an injunction order had been issued for protesters to be removed from the airport.

The clashes broke out late at night between police and protesters, who blocked the airport driveway with metal barricades and luggage trolleys.

Several police vehicles were blocked by protesters, and riot police moved in, pushing some protesters back and using pepper spray at times. Police in riot gear were also seen dragging people into vans.

The authorities said the injured person was a visitor who was assaulted and "is currently being besieged by a large group of protesters". They also stressed that it was "not an operation to disperse those assembled but is for extricating the visitor safely".

As the injured visitor was taken out of the main terminal by medics, a second man suspected of being undercover police was surrounded and prevented from leaving despite insisting in English that he was a journalist with Chinese newspaper Global Times.

Protesters tied up the man to a trolley using cable ties and displayed his passport. They also ransacked his bag, laid out the contents of his wallet and pulled out a light blue t-shirt with the words "I love HK Police" in Chinese. He passed out shortly after and was attended to by paramedics who evacuated him from the airport.

"I affirm this man being tied in this video is the reporter himself. He has no other task except for reporting. I sincerely ask the demonstrators to release him," he said with an attached video of the incident.

"I also ask for help of West [sic] reporters."

Other protesters also climbed above check-in counters to cover security cameras with umbrellas, a common tactic used during demonstrations to prevent police identification.

Earlier on Tuesday afternoon, chanting "an eye for an eye" and "restore Hong Kong", an estimated 1,500 protesters resumed their sit-in protest, resulting in the suspension of the flights.

"All passengers are advised to leave the terminal buildings as soon as possible. Affected passengers please contact their respective airlines for flight arrangement," according to an airport notice.

Protesters cheered among crestfallen travellers when the suspension announcement was broadcast over the PA system at the airport at around 5.30pm local time.

Hong Kong's broadcaster TVB reported that in-town check-in services at the Hong Kong and Kowloon airport express stations had been halted on the instructions of airlines.

Despite the airport reopening earlier, Hong Kong flag carrier Cathay Pacific said it had cancelled more than 200 flights to and out of the airport on Tuesday, according to its website.

In an updated travel advisory, Singapore's Ministry of Foreign Affairs said that Singaporeans travelling through Hong Kong were advised to check with their airlines or the Hong Kong International Airport website for flight status and important announcements before proceeding to the airport.

A Singapore Airlines spokesman said that a total of 810 passengers and one infant were affected by the disruptions on Monday. Flights resumed on Tuesday.

Scoot has advised customers to check their e-mails registered with the airline, as well as Scoot’s website, for updates. Customers travelling to or from Hong Kong between Aug 12 and 18 can rebook their flight at no additional charge for Singapore-Hong Kong, Singapore-Macau or Singapore-Guangzhou sectors within 14 days of the original flight. Alternatively, they can obtain a 100 per cent refund on their booking via a Scoot travel voucher, the airline said. 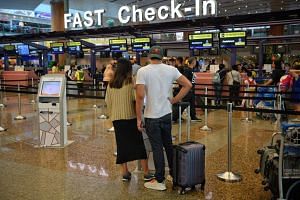 Mainlanders among Hong Kong protesters, though many stay away

At the departure hall, protesters used trolleys as makeshift barricades to block the departure gates and plastered the police office with protest signages, including a swastika with the slogan "heil police".

Some travellers voiced their support for the demonstrators despite the inconvenience caused.

Mr John Lee, 34, told The Straits Times he was supposed to leave for a five-day holiday in Taiwan on Monday afternoon, but his flight was cancelled. He decided to cancel his trip after the airline told him the earliest he could fly would be 6pm on Tuesday.

But the clerical worker, who is from Hong Kong, is sympathetic towards the protesters' cause, saying he felt the government mishandled the extradition Bill.

"(Chief Executive) Carrie Lam could have defused the situation if she just said the Bill has been withdrawn. Instead, she has opted to keep her language vague, which had made the Hong Kong people very angry, as it could be revived anytime, and if that happens we would be powerless to stop its passage," he said.

Another passenger, 27-year-old advertising worker Mag Mak, told AFP: “It may affect me, but I still know what they are doing and I support them so it doesn’t matter."  Her flight back home to Hong Kong from Dubai was delayed by five hours.

“I think the government is so rubbish and they don’t have any response to the protesters,” she added.

Mr Frank Filser, 53, was struggling to reschedule a flight back to Germany to visit his father who has terminal cancer.  But he said he sympathised with the protesters despite the disruption.

“They fight for Hong Kong and that’s their view,” he said. “Anytime I can go back to Germany, but what about the people who grew up here? This is their home.”

But others were less forgiving.

“I don’t mind what they (the protesters) do but they made us five hours delayed,” said 50-year-old Wing Au-yeung, who had stopped off in the city to pick up his aged mother before travelling to South Korea with his family.

“They can do what they want but it should not affect other people,” he told AFP.

China's Global Times tweeted footage of one irate Australian passenger who confronted young demonstrators and told them to “go get a job”.

Meanwhile, China's civil aviation authority said it would increase the transfer capacity of airports in the Greater Bay Area to avoid disruption to trips between the mainland and Hong Kong, China Daily reported.

The Civil Aviation Administration of China said it would enhance flight capacity as well as provide easier access for passengers to reschedule or cancel tickets or get refund.

Mainland airlines, such as Air China, China Eastern Airlines and China Southern Airlines, also stepped up their efforts to handle the affected passengers. The airlines said they would fully refund or help with ticket changes for the passengers affected by the cancellation of flights.

The Hong Kong authorities announced on Monday afternoon the cancellation of all remaining arriving and departing flights from the airport after more than 5,000 black-clad pro-democracy protesters staged a peaceful rally at the building. Throughout the evening, protesters gradually left the airport, but there was no police operation to clear them by force.

The protests have infuriated Beijing, which described some of the violent demonstrations as “terrorism”.

Hong Kong leader Carrie Lam said on Tuesday that the city’s recovery from protests that have swept the Asian financial hub could take a long time and that she would be responsible for rebuilding its economy “after the violence eases”.

Her voice cracking with emotion at one point, she said violence by protesters had pushed Hong Kong into “a state of panic and chaos”.

"I ask everybody to put aside our differences and calm down, take a minute to look at our city, our home. Can we bear to push it into the abyss and see it smashed to pieces?” said Mrs Lam.

Many of the posters and artwork the protesters had hung throughout the facility during the hours-long rally had been taken down, but graffiti – some reading “an eye for an eye” – could still be seen in several places.

The protesters adopted the slogan after a woman suffered a serious facial injury that reportedly caused her to lose the vision in one eye in a demonstration that turned violent on Sunday night.

Disturbing image. A woman got hit in her eye by projectile fired from the #TsimShaTsui police station. Reports said it was a bean bag round that went through her goggles. Online sources said her eyeball has burst & she might be permanently blind in one eye. #HongKongProtests pic.twitter.com/fuY2Ebvo53

The demonstrators accused police of causing the injury by firing a bean-bag round, and cited the case as evidence of what they said has been an excessive and disproportionate response by police to their protests.

At a police press conference on Tuesday, Organised Crime and Triad Bureau senior superintendent Li Kwai Wah said it was not clear what really happened as there were many versions to the incident. He added that investigation into this case has begun even though the injured woman has not lodged a police report.

The protests that began in opposition to a Bill allowing extradition to the mainland have morphed into a broader bid to reverse what the protesters have described as a slide of freedoms.

But the city’s Beijing-backed leader has ruled out meeting the protesters’ demands, which include the right to choose their next leader and an investigation into alleged police brutality.

The demonstrations have become increasingly violent, with police using tear gas and rubber bullets to push back protesters who have sometimes hurled bricks and bottles.

“It is becoming more and more dangerous, but if we don’t still come out at this point, our future will become more frightening, and we will lose our freedoms,” a 22-year-old protester at the airport told AFP on Monday.

The movement has infuriated Beijing, where the authorities on Monday slammed violent protesters who threw petrol bombs at police officers, linking them to “terrorism”.

“This wantonly tramples on Hong Kong’s rule of law and social order.”

A commentary early on Tuesday on China’s official Xinhua news agency spoke of “black-clad mobsters” and said Hong Kong’s future is at a “critical juncture”.

A senior official in the administration of United States President Donald Trump on Monday urged “all sides” to avoid violence in Hong Kong.

“Societies are best served when diverse political views are respected and can be freely and peacefully expressed,” the official said on condition of anonymity.

With additional information from AFP, Reuters