HONG KONG • At one of the world's busiest aviation hubs, Hong Kong International Airport's arrival hall was transformed into a sea of black yesterday as some 5,000 pro-democracy activists gathered wearing black T-shirts - the signature colour of the movement - chanting "fight with Hong Kong, fight for freedom!"

Many added a new accessory: eye patches or bandages to pay tribute to a woman who suffered a serious face injury at a protest on Sunday night.

The woman, who has not been identified, was reportedly hit by a beanbag round fired by police, and rumours circulated that she had lost her vision. Images of blood pouring from her face as she lay on a pavement quickly went viral and featured in posters calling for demonstrations under the banner: "An eye for an eye."

"HK police are killing us," read a sign held by one protester. And on walls, pillars and barriers in the airport, protesters spray-painted red graffiti in English and Chinese reading "an eye for an eye".

"Hong Kong police are out of their minds, exceeding the level of force in their guidelines," said a 22-year-old protester who gave only his surname Law.

Some protesters said the airport was chosen as a venue because they believed police would not fire tear gas with international visitors in the area. But crowds started dispersing in the late afternoon, with many believing the police would mount clearance operations at 6pm, a fear further exacerbated when the lights briefly went off.

Along with stranded travellers trying to make their way into town, many flooded various public transport platforms, including the express train into the city, the bus station and taxi stands. But with traffic at a near standstill - some protesters had used their vehicles to block surrounding roads - hundreds gave up and walked to the nearby Tung Chung metro station 5km away.

En route, some drivers offered rides to protesters, winding down their windows and shouting their destinations, a common occurrence during recent protests.

The chief executive of Hong Kong's Cathay Pacific Airways says there will be "disciplinary consequences" for employees involved in "illegal protests", as the airline joins a slate of businesses that have appeased and apologised to China in recent days over political flaps. In an internal memo to employees, airline chief Rupert Hogg warned that the company has a "zero tolerance approach to illegal activities", referring apparently to protests unapproved by the police. Cathay Pacific staff who join the protests face a ban on flights to the mainland. 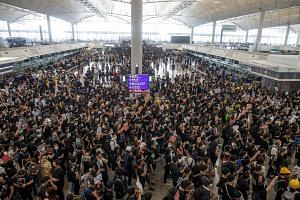 Hong Kong protests shut down airport in biggest disruption yet

Companies from luxury fashion brands to bubble tea shops have been under pressure to distance themselves from protesters and declare their support for the ruling Communist Party's position on Hong Kong.

But protesters have been circulating a spreadsheet aimed at boycotting brands perceived to be supportive of the establishment.

Meanwhile, Hong Kong's billionaires are beginning to break their silence as the costs of escalating violence mount, with the largest shareholder and former chairman of developer Wheelock & Co, Mr Peter Woo, calling on protesters to ease off after they notched a victory by blocking the government's extradition Bill.

In a piece in the Hong Kong Economic Journal, he said two months of unrest have weighed on the territory's stock market, wiping out more than US$1 billion (S$1.39 billion) from Mr Woo's personal wealth.

"It's time to think deeply," he wrote, adding that some people are using the issue to "purposely stir up trouble". Wheelock gets about 38 per cent of its revenue from mainland China, making him one of the most exposed to China among Hong Kong's property billionaires.

But some tycoons say Hong Kong's population has reason for discontent. Lan Kwai Fong Group head Allan Zeman told Bloomberg urgent solutions are needed to address the housing crisis. "A lot of these people, I don't blame them for marching because they don't have hope," said Mr Zeman, whose holdings span Hong Kong, mainland China and Thailand. "They live with their parents, they don't see a future for themselves," he added.

A version of this article appeared in the print edition of The Straits Times on August 13, 2019, with the headline 'Protesters turn airport into sea of black'. Subscribe
Topics:
More
Whatsapp Linkedin FB Messenger Telegram Reddit WeChat Pinterest Print Copy permalink