Meeting Kim on his third trip to China in less than three months, and just a week after Kim met Trump in Singapore, Xi said China was willing to keep playing a positive role to promote the peace process on the Korean peninsula.

Kim’s visit was the latest in a flurry of diplomatic contacts, and unlike during his previous two visits to China, the government announced his presence while he was in the country rather than waiting for him to leave.

Xi told Kim that he was very happy to see the “positive”outcome of his meeting with Trump, and the important consensus reached on denuclearisation and setting up a lasting peace mechanism, according to Chinese state television.

“No matter the changes in the international and regional situation, China’s party and government’s resolute position on being dedicated to consolidating and developing Sino-North Korea relations will not change,” the report cited Xi as saying.

Kim told Xi he hoped to work with China and other parties to push the peace process, Chinese state television said.

The timing of his trip sends a clear message about Beijing’s place at the center of East Asian diplomacy and its power over Pyongyang, according to analysts.

With US-China trade ties on the rocks, Kim is well-placed to play both powers, talking sweet to Trump while pursuing a closer relationship with Xi.

“Although it seems there is a booming romance between Kim Jong Un and Trump, Kim understands the hierarchy. He knows that Xi is the Asian Godfather,” said Yanmei Xie, a China policy analyst at Gavekal Dragonomics, an economic research firm in Beijing.

“He is making a pragmatic calculation that China can provide economic assistance to integrate North Korea diplomatically and economically into Northeast Asia.”

Kim’s visit to China this week will renew questions about what happens post-Singapore.

“There is a regional effort, a sort of Northeast Asia coalition of make-believe, to maintain the fiction that the North Korea will de-nuke as long as Americans keep talking to it,” said Xie.

China is less focused on getting Kim to give away his weapons than on getting him to fall into line. They may eventually use trade and investment to keep him on side, experts said.

The question now, said Zhao, is “how can China help North Korea develop its economy?” China can also help Kim normalise North Korea’s diplomatic status. That starts with treating him less like a rogue dictator and more like a visiting statesman – a progression that can be seen in the nature of the latest visits.

Previously China would only confirm Kim had visited after he had left the country.

On Kim’s first visit as leader, in March, he arrived unannounced aboard an armoured train. Beijing did not disclose his presence, or publish pictures, until he left.

He met Xi a second time in May in the Chinese port city of Dalian. Photographs of the two leaders strolling and chatting by the seaside were not released until Kim was on his way home.

While Kim's latest trip is not formally billed as a state visit, China gave Kim most of the trappings of one, including a welcome ceremony with honour guard in Beijing’s Great Hall of the People.

The two men were accompanied by their wives. Xi said he was pleased to see North Korea’s decision to promote economic reforms, adding that China’s own reform and opening up process had meant the Chinese people’s eyes had been open to the world.

Trump agreed to work with Kim towards complete denuclearisation of the Korean peninsula, committed to provide the North with security guarantees and pledged to end “war games” with South Korea, which North Korea and China have long seen as provocative.

South Korea and the Pentagon announced they would halt the annual Freedom Guardian military drill scheduled for August.

A Kim trip to China to discuss his summit with Trump had been widely anticipated in diplomatic circles.

China is North Korea’s most important diplomatic and economic backer but has been angered by its nuclear and missile tests.

“Our government hopes China will play a constructive role in resolving this problem,” ministry spokesman Noh Kyu-deok told a regular briefing. “We hope Chairman Kim Jong Un’s visit will contribute to that.”

The fact that Kim visited China on the same day the Pentagon officially suspended a key military exercise with South Korea are two moves which underscore the North Korean leader’s success in rolling back the US-led “maximum pressure” campaign against his regime.

"Kim is reaching out to traditional friends and rivals and it really complicates the US position of maximising pressure on North Korea,” said Stephen Nagy, a senior associate professor at the International Christian University in Tokyo.

“As long as we have diplomacy, the rational for war games and American troops in South Korea becomes more and more diluted.”

Police tightened security along Beijing’s main Changan Avenue, which leads to the Great Hall of the People where Chinese leaders normally meet visiting heads of state, and also outside the Diaoyutai State Guest House, where Kim stayed with his wife during his March visit to Beijing.

Outside the east gate of the Great Hall, where foreign leaders are officially welcomed, the authorities had erected a screen running the full length of the road, cutting off the view behind it. 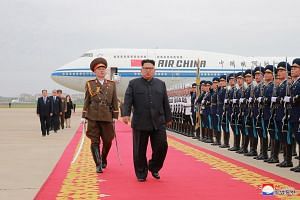 Trump-Kim summit: US President says his agreement with North Korean leader will be good for China

Beijing has been particularly pleased by Trump’s announcement to suspend military drills, which China has long pushed for under its “dual suspension” proposal, whereby North Korea stops weapons tests and the United States and South Korea stop military drills, so both sides can sit down for talks.

In addition to discussing last week’s summit, Kim is expected to ask China to help him in efforts to seek relief from economic sanctions in return for his pledge to denuclearise, Japan’s Nikkei business daily said in a dispatch from Beijing.

Following the historic US-North Korea summit in Singapore a week ago, China suggested the UN Security Council could consider easing the economic punishment of its Cold-War-era ally.

Kim's latest trip to China has also sparked speculations that sanctions imposed by Beijing may be discussed. Japanese media reports citing unnamed sources claimed that Kim is likely to seek Xi’s support in demanding international sanctions to be eased.

While China is said to have reaffirmed to US Secretary of State Mike Pompeo that the measures will remain in place until denuclearisation is achieved, a number of news reports have since claimed that sanctions may be being eased.

According to reports citing unnamed sources, a number of factories concerned with China-North Korea trade have recently resumed operations.

The New York Times also reported that some 100 North Koreans have been hired by clothing manufacturers in Hunchun, China.

China may not have been at the table for the historic summit in Singapore but it retains strong influence behind the scenes.

In a joint statement following the Singapore summit, Kim pledged to “work towards the complete denuclearisation of the Korean Peninsula”.

Trump hailed this as a concession, but critics said the stock phrase long used by Pyongyang stopped short of long-standing US demands for North Korea to give up its atomic arsenal in a “verifiable” and “irreversible” way.

It is now urgent for Xi and Kim to discuss how North Korea will work towards meeting US demands, said Beijing-based international relations commentator Hua Po.

“There may be differences ahead between the DPRK and the US in regards to denuclearisation, because the US wants irreversible and verifiable denuclearisation. It may be difficult for Kim Jong Un to accept,” Hua told AFP. DPRK, or Democratic People’s Republic of Korea, is North Korea’s official name.

“Therefore, both China and the DPRK want to strengthen communication and form an overall strategy to deal with the United States going forward,” Hua added.