SEOUL (AFP) - North Korea on Thursday (Aug 1) released heavily pixellated images of its latest weapons test, describing it as a new guided rocket launcher and fuelling concerns that it could be used to target a key US military base in South Korea.

Pictures carried by the North's state television showed leader Kim Jong Un supervising Wednesday's launch from what appeared to be a mobile command post, and a silhouette of him watching the weapon rising into the sky.

But in an unusually secretive move, some of the images were heavily pixellated and the official KCNA news agency did not release photos of the test.

That suggested Pyongyang had not previously displayed the system at one of its military parades and was trying to hide some of its characteristics.

Following the launch, Seoul on Wednesday said it involved two short-range ballistic missiles that travelled 250km before coming down in the sea.

But KCNA described it as a "newly-developed large-calibre multiple launch guided rocket system".

The system would have a "main role in ground military operations", KCNA said, quoting Kim as saying it would cause "inescapable distress" to the forces which became its "fat target".

Pyongyang has long possessed the ability to devastate Seoul - which is only around 60km from the border - with artillery fire. 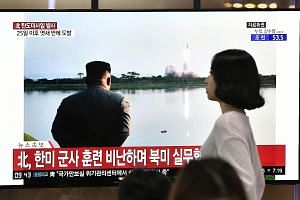 Cho Sung-ryul, a researcher at the Institute for National Security Strategy, said a working guided rocket system capable of precision targeting would pose a new threat to specific installations in the South.

The US stations 28,500 troops in South Korea, a security ally, to protect it against its nuclear-armed neighbour, many of them based south of Seoul at Camp Humphreys in Pyeongtaek - its biggest overseas military facility.

"If it travelled 250km at an altitude of 30km, it could reach the US base in Pyeongtaek," Cho added. "I think this is being overlooked since North Korea keeps warning the South."

US President Donald Trump - who has repeatedly touted his relationship with Kim - has played down the North's recent launches, saying its rhetoric was targeting Seoul rather than Washington.

Pyongyang described it as a "solemn warning to the South Korean warmongers", calling for the cancellation of planned joint military drills between Washington and Seoul.

But the US and South will press ahead with the exercises, a Pentagon official said.