WASHINGTON (REUTERS) - US President Donald Trump on Friday (July 26) played down North Korea’s latest launch of short-range ballistic missiles, calling them "very standard," a response some analysts said exposed flaws in his approach to Pyongyang and ignored the threat posed to allies Japan and South Korea as well as the US troops they host.

North Korea conducted similar tests in May and the new launches came after Pyongyang accused Washington of going back on a pledge by Mr Trump to Mr Kim by planning to hold military drills with South Korea next month and warned that the talks were at risk.

Asked whether he was troubled by the tests, Mr Trump, who is keen to hold up his engagement with North Korea as a foreign policy success ahead of his 2020 reelection bid, told reporters at the White House: "No. Not at all."

"We’ll see what happens, but they are short-range missiles and many people have those missiles ... very standard missiles," he said, reiterating that he has a very good relationship with Mr Kim.

Mr Trump also said Mr Kim had not called the launch a warning to the United States.

"He didn't say a warning to the United States. They have their disputes, the two of them; they've had them for a long time," he said of North and South Korea.

US Secretary of State Mike Pompeo has also sought to play down the launches, even though all ballistic missile tests by North Korea are banned by UN Security Council resolutions that Pyongyang rejects as infringing on its right to self-defense.

Mr Pompeo said on Thursday fresh talks were still possible with North Korea and he anticipated they would take place in a couple of weeks.

"You know, lots of countries posture before they come to the table," he told Fox News. 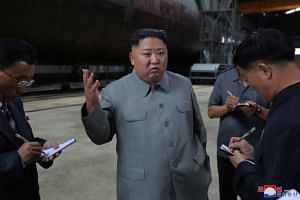 Mr Joel Wit, founder and senior fellow at the 38 North think tank in Washington, who has long been an advocate of engagement with North Korea, said the administration was right to take a patient approach, but added: "It should also have a game plan to unveil at some point to demonstrate that its patience is running out."

Mr Trump hinted at some impatience in an interview with Fox News on Thursday, saying: "I think with North Korea we’ve been doing very well. But that doesn’t mean it’s going to continue." He did not elaborate.

Other analysts said Mr Trump appeared too desperate to try to get a deal, even at the expense of raising the risks posed to US allies Japan and Korea, which are both within range of Mr Kim’s short-range missiles, as are tens of thousands of US troops based in North Asia.

"Trump already damaged alliance solidarity and deterrence when he demonstrated during his state visit to Tokyo in May that he would give North Korea a pass on missiles aimed at America’s allies, rather than the United States," said Mr Daniel Russel, the State Department’s top diplomat for Asia until early in the Trump administration.

He said Mr Trump’s willingness to turn a blind eye to further violations of UN resolutions sent another message to Mr Kim: "’My reelection bid requires I claim my North Korea policy is working, so you have leverage over me and a virtual free hand to keep manufacturing nuclear weapons ... all I ask is that you don’t conduct a nuclear test or launch an ICBM that I can’t ignore.’"

Mr Trump has repeatedly held up Mr Kim’s nearly two-year freeze in testing of nuclear bombs and intercontinental ballistic missiles capable of reaching the United States as evidence of the success of his engagement with North Korea.

Mr Van Jackson, a senior lecturer at Victoria University in Wellington, New Zealand, said that while individual tests might not be a big deal, an active pattern of testing accelerated North Korean capabilities in weapons it might actually use, while keeping its nuclear capability as a deterrent to the United States.

"Responding to missile tests by saying ‘Let’s talk,’ is a big, fat moral hazard," he said. "It reinforces Kim Jong Un’s own perception that the US is desperate for talks."