WASHINGTON - North Korea appears likely to mark its founding anniversary next month with a military parade that is larger in scale than the one held in February, a United States website monitoring the regime said on Tuesday (Aug 21), Yonhap news agency reported.

Pyongyang is preparing to celebrate the 70th anniversary of its founding on Sept 9, and commercial satellite imagery from Aug 12 shows "a high level of activity" at the Mirim Parade Training Ground, according to 38 North, a project of the Stimson Centre think tank.

"Given the pace of the build-up and training, North Korea's upcoming Foundation Day Parade (reportedly to be held on Sept 9) will probably at least match, but likely surpass, the size of the parade held this past February to mark the 70th anniversary of the founding of Korean People's Army," it said in an article posted on its website.

The imagery shows about 500 trucks, which are used to move troops to the training site, a small tent city where troops are housed and fed, six groupings of soldiers moving in parade formation along the facility's roads, and the expansion of storage shelters, according to 38 North.

Preparations for the parade were first observed last month, following a pattern seen in recent parades, it said.

"The number of shelters appears slightly larger than what was used in the February parade, and there are at least 10 pieces of equipment (including several tanks or artillery pieces) in front of their respective shelters," the article said, noting that these shelters have previously been used to house and prepare ballistic missile and unmanned aerial vehicle (UAV) launchers, tanks, large artillery pieces and other heavy equipment away from view.

"There are no ballistic missile or UAV launchers as of the date of this image," it said. 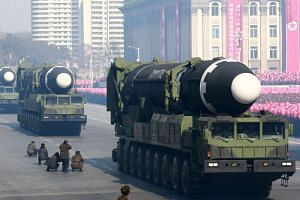 It would be Mr Xi's first visit to the communist ally as president and would follow tensions last year over Pyongyang's nuclear and ballistic missile programmes.

Meanwhile, Mr Kim travelled to China three times this year to hold talks with Mr Xi and apparently coordinate their steps before and after the North Korean's landmark meetings with South Korean President Moon Jae-in and US President Donald Trump.