SEOUL (NYTIMES) - Senior officials from North and South Korea will meet next week to discuss the possibility of a third summit between their countries' leaders, the South said Thursday (Aug 9).

The North Korean leader, Kim Jong Un, and President Moon Jae-in of the South have already met twice this year, in April and in May. South Korean officials have recently expressed interest in holding a third meeting soon, in hopes of breaking an impasse between North Korea and the United States over the dismantling of the North's nuclear arms programme.

Moon has accepted an invitation from Kim to visit Pyongyang, the North's capital, in the fall. But no date has been set, and it is unclear whether the proposed third summit would be held there. A meeting at Panmunjom, the so-called truce village on the inter-Korean border where the previous talks were held, would take much less time to arrange.

The South's Unification Ministry said Thursday that North Korea had proposed holding ministerial-level talks at Panmunjom on Monday to discuss preparations for another summit, and that South Korea had quickly accepted the offer.

At their April 27 meeting, which was the first time Kim and Moon met, the two reached a broad agreement on easing military tensions and improving their countries' ties. They also said that "complete denuclearisation" of the Korean Peninsula was a shared goal.

That meeting, and the one that followed at Panmunjom on May 26, helped to lay the groundwork for Kim's historic talks with President Donald Trump on June 12 in Singapore, the first time sitting leaders of the United States and North Korea ever met.

Trump and Kim signed a joint statement in which Kim again committed to work toward "complete denuclearisation of the Korean Peninsula," while Trump promised to provide the North with security guarantees and to help build "new" bilateral relations.

But the statement included no specifics on how denuclearisation would be achieved, and both sides have since expressed frustration with each other.

North Korea called the Trump administration's behaviour "gangster-like" last month after Secretary of State Mike Pompeo visited Pyongyang, where he urged the country to take concrete steps toward denuclearisation, like handing over an inventory of its nuclear weapons and facilities, and dismantling some of them. 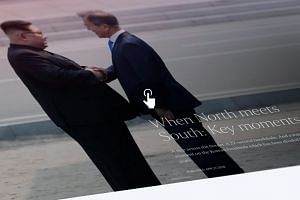 The United States and South Korea cancelled their joint annual military exercises this year, in hopes of encouraging North Korea to denuclearise. But last week, speaking at a regional forum, the North Korean foreign minister, Ri Yong Ho said the United States was not doing enough, while his country had halted nuclear and missile tests, demolished an underground nuclear test site and started dismantling a missile engine test site.

He reiterated that the two countries should take "simultaneous actions and phased steps", meaning that the United States should match such moves by the North with concessions of its own.

North Korea has recently demanded that the two countries jointly declare an end to the Korean War, as a prelude to negotiating a formal peace treaty to replace the armistice that halted the fighting 65 years ago. During their April meeting, Kim and Moon agreed to push for such a declaration by the end of this year.

But US officials have been reluctant to grant such a highly symbolic concession to the North before the country takes more meaningful steps toward denuclearisation. For its part, North Korea considers such a declaration essential to showing that the United States is no longer hostile toward the North, analysts said.